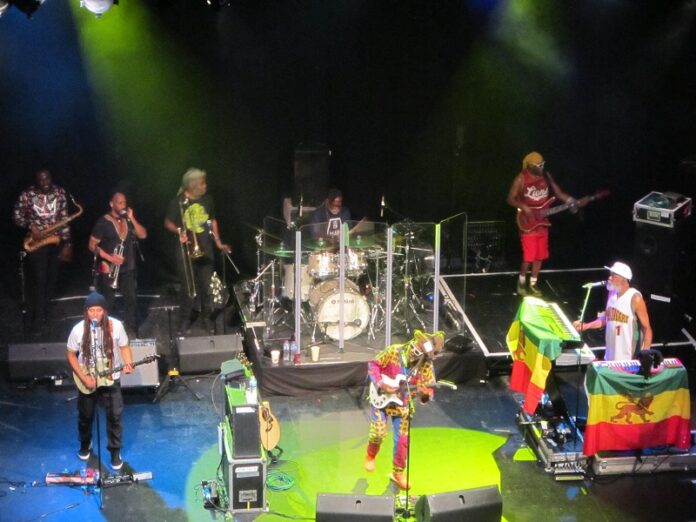 Local guys The VRB or Versatile Reggae Band were the right opener for this show this evening and had us all nodding our heads and tapping our feet as they shared what according to their website is a mixture of music that will sooth your mind, body, and soul.  We enjoyed a variety of songs that included `Rockaway`, `Positive Groove`, `This Reggae Music`, a lovers rock number called `You`re So Beautiful` before leaving us wanting more with a song about what happens to a person, happens because they caused it with their actions in `Karma`. How can I best describe this infectious seven piece, a sort of mixture of Third World and Inner Circle. A band worth checking out if you get the chance.

Tonight, was always going to be a quite emotional night for me. Steel Pulse one of the finest purveyors of roots Reggae music return to their hometown and mine of Birmingham. This show has been a long time coming, having been postponed twice already due to the global pandemic.

An awful lot has changed since I first saw these hometown heroes in 1978 supporting The Stranglers at Stafford Bingley Hall and then at the Top Rank Ballroom which became the Hummingbird in Dale End not long after the release of their debut album, the classic `Handsworth Revolution`. A good friend, who moved to London was there to write a review for the magazine Black Echoes so I went along with her. The only founding members of the band who remain are lead singer and rhythm guitarist David Hinds and keyboard p[layer and backing singer Selwyn Brown. The first three albums `Handsworth Revolution`, `Tribute To The Martyrs` and `Caught You` to me were stunning but as the band increased in popularity and started to make waves in the Unites States I kind of lost touch with them and have only bought 1991`s `Victims` since.

There`s almost a wall of sound from the brass section Stephen Bradley on trumpet, Shaunte Palmer on trombone and Sheldon Palmer on saxophone as the group open up with the irresistible `Rally Round` a track from one of lead singer David Hind`s favourite albums True Democracy`. We have a nod to the debut album with the introspective `Soldiers` before the uplifting `Chant a Psalm`.

` Wild Goose Chase` follows  which not only has a guitar solo from David “Cirious” Elecciri Jr. but also a trumpet and sax solo thrown in for good measure. The really powerful and relevant `Don’t Shoot` from the Grammy award nominated last album `Mass Manipulation` is shared and it`s difficult to listen to the lyrics of “I’m choking and can’t breathe breathe, breathe” and “I’m choking I can’t breathe eh?” A massive cheer erupts as `Drug Squad` rings out which ends up with a dub like vibe that includes snippets of `Moondance` and ` My favourite things` are mixed in along the way.

We get a mixture of numbers from throughout the band`s back catalogue with songs that include `Black and White Oppressors`, `Bodyguard`, `Babylon Makes the Rules` the wonderful earworm of `Stop You Coming and Come` before closing out with what I think was `Steppin’ Out`

`Handsworth Revolution` with all the memories it stirs up. `Blues Dance Raid` has the rest of the band Selwyn Brown on keys, Amlak Tafari on bass and Wayne “CSharp” Clarke on drums knocking it out the park. The oddly titled `Roller Skates` with it`s telling lyrics of “Life life without music, I can’t go go no, Life without music I can’t go” gets a blast before the packed audience go into meltdown as the emotive `Ku Klux Klan` ends the night and is no less powerful or any less relevant over forty years since it first aired.

It was a really emotional night and at times pretty hard to take in but one thing that lead singer David Hinds said struck home and that was that although the band don`t get to play in their hometown that often they take Birmingham districts like Ward End, Moseley, Aston, Shard End, Erdington, and most of all Handsworth to all four corners of the Globe when they play.

To me that meant everything.