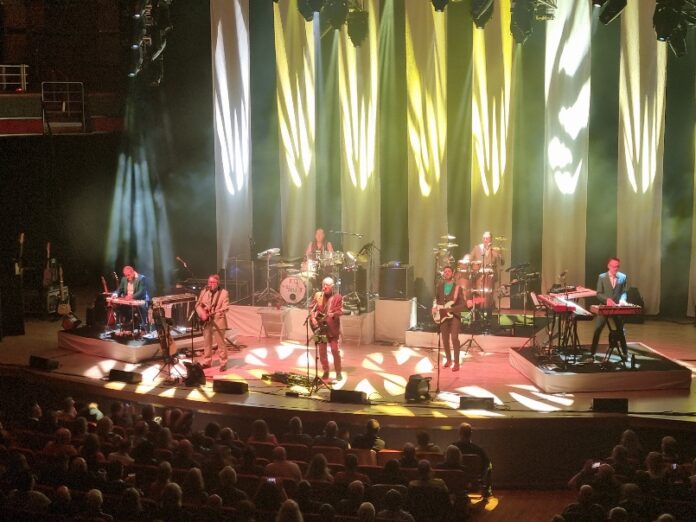 John Cooper Clarke has, at 73 years old “circumnavigated the globe 10 times” with his poetry, he reckons. Fileas Fogg could do it in 80 days, so the good Dr has been slacking it seems to me. 40 minutes of spoken word before a rock concert has been his stock in trade for 45 years though, and watching him rip through “Hire Car” in that trademark rapid fire style, with a use of language that no one would think of its not hard to see why. Poetry should reflect the change in times, too and this does. He deals with his sobriety in the most head on way with “Get Back On Drugs, You Fat Fuck” and the aging process in general with “Bedblocker”. The most interesting, though is “Beasley Street” (“the BBC use this every time they do a programme about Thatcher, I wrote it 18 months before the bitch got near Westminster”) which is followed by its modern equivalent “Beasley Boulevard” about the gentrification of the area. That’s when he’s at his best, raging against injustice, his comedy in between is not for me, I have to admit. “Evidently Chickentown” has left me cold since The Sopranos used it, likewise “Twat” isn’t to MV’s tastes either, but “I Wanna Be Yours” is better and it’s a set with more hits than misses. And whatever I say, Dr John Cooper Clarke isn’t changing and he’s got more globetrotting to do.

Glenn Tilbrook and Chris Difford have been at this game for almost 50 years. They know how to pace a set at this point, lets be honest, but still. Halfway through this (roughly) they play a truly sensational, “Pulling Mussels (From The Shell)” and not only do you realise how good a guitar player Glenn Tilbrook is, but it gets Birmingham’s Symphony Hall up and dancing. Playing it there is a masterstroke, but then Tillbrook says: “you’ll soon be sitting down….this one’s called “Is That Love”.

It had begun 45 minutes earlier with “Take Me I’m Yours” and third song in, it had stopped off at “Up The Junction”. I remember as a little boy watching the tune on Top Of The Pops, and listening to the band as I have in the last week or so, it strikes me just how good a song it is. I love words. I always have, and the way Difford and Tilbrook write songs is incredible.

The gift is still there too. “Cradle To The Grave” released in 2015 and the theme tune to Danny Baker’s comedy series on BBC 2 has the same class, as does the new song they’ve just released “Food For Thought”. A charity single for The Trussell Trust’s work with homeless people, it’s a vicious attack on the government that allowed this to occur.

The presence of those and the seldom played “What Have They Done” is evidence that they haven’t just come here to play the hits, but my goodness! When they do, like “Labelled With Love”, they are unstoppable, and the songs prove my unshakable belief that the best don’t date.

The reason for that, perhaps, can be seen in the five others on the stage with the main two. Keyboardist Simon Large is brilliant and charismatic and Melvyn Duffy’s lap steel playing adds a real country flavour. The pair shine, but the rest are clearly premier league performers too. Steve Smith’s energy on percussion, new bassist Owen Biddle and Drummer Simon Hanson would improve many bands for sure.

All of which means that when they race for the end, they do so in an incredibly varied way. “Very First Dance” is funky, “Goodbye Girl” gets cowbell bonus points, “Another Nail In My Heart” is proper rock n roll, strutting about, and cocksure. However it’s “Tempted” that ends up being a highlight, Tillbrook plays it mostly solo, before it kicks in and its fabulous.

The set ends with that other number two hit single in 1979 and “Cool For Cats” is wonderful. The quintessential English song almost, right down to its double entendre’s. Another of that vintage “Slap And Tickle” begins the encore in a haze of synth and spotlights, before “Black Coffee In Bed” is used as a vehicle for the band to each get a moment in the spotlight.

Its at this point you remind yourself that “pop” derives from “popular” and you realise you’ve just witnessed some of the finest pop songs in history played by a superb band. And that, will never not be cool. For cats, or otherwise.