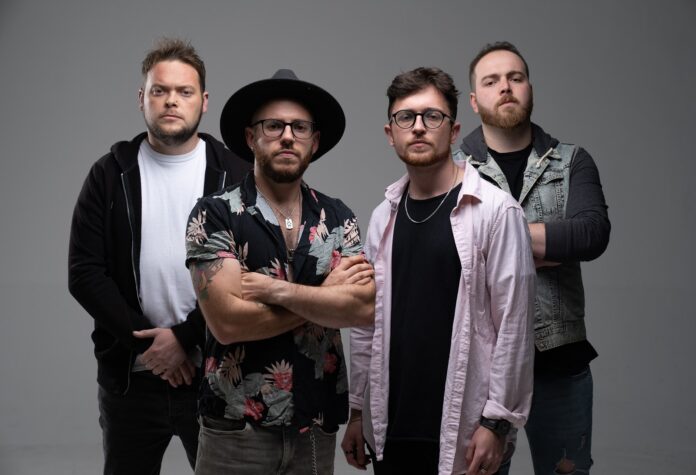 The exciting 4-piece alt-rock band Skinny Knowledge release their new single ‘Class A Dummy‘, bringing the party with a fast paced, punk infused style available now on all digital platforms. “It’s exactly what it says on the tin! A tongue n’ cheek song about partying, getting wasted, and having a good time.” grins frontman and guitarist Andy L Smooth, “Catchy singalongs, big riffs, guitar solos, and a whole heap of energy…everything you’d expect from a Skinny Knowledge song!”

Accompanying the track is the fun and engaging video directed by Joe Hoey (Blackwater Country) which captures the core of the band (Max Harris guitar/vocals and Rab McGowan on bass/vocals) playing, drinking, and generally having a blast surrounded by their friends and fans. Andy goes on laughing, “What you see is what you get with us. This is 100% what to expect at our shows, you’re going to have a good time and possibly a hangover the next day!” The catchy feel-good song was written by the band and co-produced/mixed by Andy and Tom Auton (Chanel Yates), additional engineering by Joe Burgess at The Ranch Production House Southampton and mastered by Grant Berry of Fader Mastering (Boston Manor, Cold Years).

Hailing from the south coast of England and formed in 2020 by frontman Andy, the band’s sound captures the vibrancy of the raw and raucous, early 90’s grunge and pop-punk scenes. The band has had praise and airplay from a number of high-profile music platforms, including Kerrang!, Classic Rock Magazine (the single ‘I Wonder’ was voted Classic Rock Magazine’s “Track of the Week”), Planet Rock, BBC Introducing, Amazing Radio, Emerging Rock Bands and many more.

Since the release and well received by fans and critics alike success of their debut album ‘Don’t Turn Out the Lights‘, the band have gone on to release singles, toured, and played at various venues and festivals. They are currently in the process of writing and recording a second album for release in 2023 with a Kickstarter campaign featuring exclusive, and some very creative, perks being launched soon…