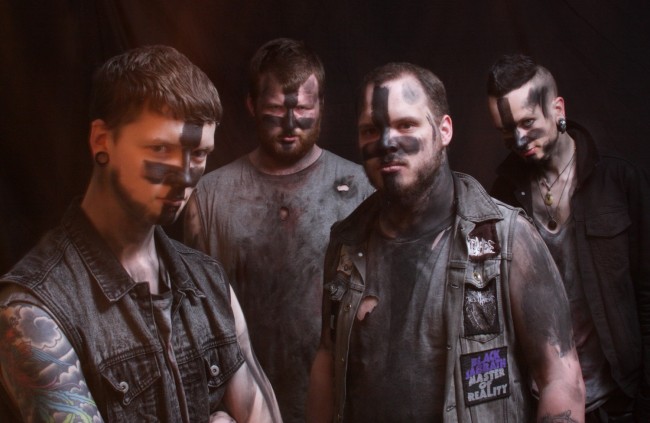 “This release has a bit of everything, from Thrashy old schoolness to Power Metal vocals to Black Metal riffing,” say the band. Ohhhh, say MVM

KING LEVIATHAN of Brighton England, devout worshipers of Speed, Violence and The Occult, have spread madness from their inception. With their new EP “The Shrine” about to hit May 31st there is no sign of stopping. With “The Shrine”, every second of speed, aggression, and riotous fun is to be savored.

KING LEVIATHANliberally blends many different styles of Metal and Hardcore into an intense, fiery stew. Riffs with roots firmly planted in the great American Thrash and European Metal traditions peel out of every single song, bolstered by a rhythm section, and featuring solid drumming, that is relentless.The frenetic pace so characteristic of the genre is kept the entire way, the delivery tight, yet not without the feeling of spontaneity. Creating images of the house that you and your beer-bong buddies proceeded to trash when the neighbor kid’s parents left for the weekend.

The follow-up to their self-titled 2014 debut, this new 5 track offering “THE SHRINE” is a marked step forward for the four piece and was recorded over a week long period at Brighton Electric with Producer Paul “Win” Winstanley at the helm.

“We knew we wanted the next E.P to be bigger and better in all aspects – and Win’s work with ‘Sea Bastard’, ‘Whitemare’ and early ‘Black Peaks’ stuff really impressed us! So we hit the studio, and before we knew it we were smashing beer kegs with hammers, scoring violin stabs and laying down choir vocals… Nuts!” says the band

You can catch KING LEVIATHAN this summer, letting it rip at one of Europe’s largest Metal Fests BLOODSTOCK 2015 and in October at MAMMOTHFEST 2015

The Shrine Tracklisting:
1. Intro
2. Wormwood
3. Born of the Blackest Hearts
4. Skin from Bone
5. Madness Made Divine
6. The Shrine