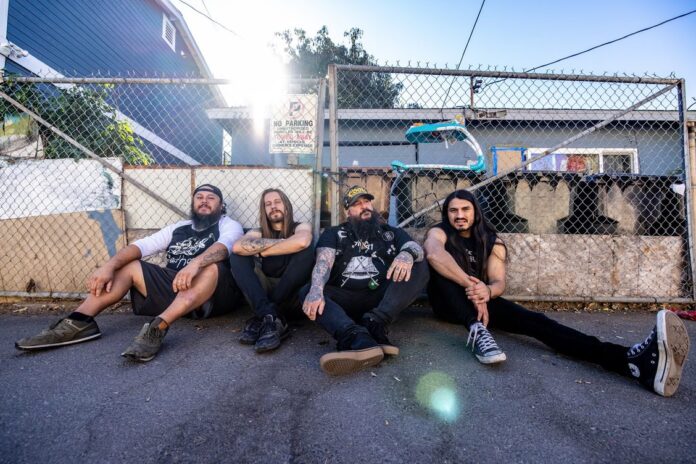 Following a string of sold-out dates in Australia, today, ARIA Award winners Spacey Jane unveil their aching new ballad It’s Been A Long Day, alongside a video. The new single will feature on their second album, Here Comes Everybody out in June via AWAL.

The Fremantle foursome have just kicked off a 17 date tour of the UK and Europe, with demand such that many venues have either been upgraded or sold out. Spacey Jane also has 24 dates across North America in October and November, again with some shows sold out months in advance.

Vocalist and guitarist Caleb Harper has this to say of It’s Been A Long Day, “This song was written pre and post a breakup in 2020. It was a way to tell someone that I loved them when I was feeling so anxious and down in the early stages of COVID – and I didn’t know if I was doing enough to really tell them. In the end I became so overwhelmed and unwell during a six month period that I convinced myself that music was a lost cause, and the complete loss of identity resulted in the breakdown of the relationship. I’ve got something to say, was trying to say all the things I felt for her at once. In the end, after the breakup, the final lines of the song are – I really loved you.”

Filmed in an old apartment in Los Feliz, L.A., by director Serena Reynolds, the official video for It’s Been A Long Day captures the sadness and desperation of the song themes. “Sarah Pidgeon (The Wilds), graciously volunteered her time and talent, from working through ideas and appearing in the clip,” says Caleb. “We wanted to tell the story of a break up through the lens of a home being pulled apart, packing clothes into boxes next to a mattress on the floor, an empty kitchen and bathroom. I play a character who is despondent and reckless. Meanwhile Sarah, while also despondent, is trying to understand what’s going on in my head and still hanging on. We cut in moments of happiness and golden light with the heartbreak of the rest of the video. They are strange and surreal and don’t really portray a normal relationship existing even before it all fell apart,” he adds.

Taken from the working title of Wilco’s seminal album Yankee Hotel Foxtrot (one of the bands’ favourite albums) Here Comes Everybody first came to life at the start of the 2020 lockdown. The album features recent single Sitting Up, Lots of Nothing which landed at #3 on the triple j hottest 100 and Lunchtime which also took out the #12 position on the coveted poll.

Of Here Comes Everybody, Caleb muses, “Our first record, Sunlight, discussed personal experiences of mine and it was a blessing to see how many people related to those stories. I want this record to be for youth persevering and thriving emotionally under the weight of our generational burden made up of climate change, COVID etc. Feeling like you have the responsibility of your entire future on your shoulders without any say in what happens creates anxiety and uncertainty. I think  COVID took away the sense of unity that gives young people assurances in such times. I  know music isn’t a replacement for taking control and galvanising positive change, but I  hope this record can soundtrack some of those moments in people’s lives.”

The beginning of Spacey Jane’s astonishing success in Australia arrived when the band released debut album Sunlight in June 2020.  Universal adulation duly followed for the band – vocalist and guitarist Caleb Harper, bassist Peppa Lane, guitarist Ashton Hardman-Le Cornu and drummer and manager Kieran Lama. The album debuted at #2 on the ARIA album chart, was voted Album of the Year in the triple j Listener’s Poll and was nominated for a J Award for Album of the Year.  The sleeper single-turned-megahit, Booster Seat picked up Song Of The Year at the 2021 ARIA’s, the AIR Awards Best Independent Song Of The Year and is certified platinum. It currently sits at over 35 million streams on Spotify alone, with the band hitting 180 million in total streams. Booster Seat also landed at #2 on the triple j hottest 100 in 2021, alongside Skin at #15, Straightfaced at #28 and Weightless at #81.

Now, the world at their feet, the shows they have managed to play since the live scene has reemerged from lockdown have welcomed the long-overdue in-person coronation of Australia’s new stars.

Spacey Jane will tour the UK in April on the following dates. Full international routing can be found here.