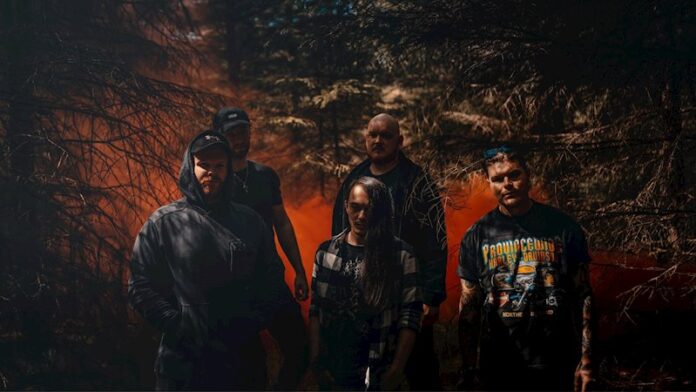 This new narrative moving picture sees DVL embracing their love of the horror movie genre and is the first in a trilogy of music videos that tell an ongoing story. ‘Eternity’ leads the charge as it delves into the dark world of the occult and one man’s obsession with seeking a deal with the devil. As the story unfolds, questions are raised as to the cult’s ideological and philosophical beliefs and how far this man is truly willing to sell his soul, but at what cost?

Mixing blazing sonics with the classic sound of NWOBHM that’s aligned with tinges of U.S. hard rock and heavy metal, the SAMA (Scottish Alternative Metal Awards) nominated group will release their new 10 track record ‘Hush’ through WormHoleDeath Records this May.

DVL’s forthcoming collection of heavy hitting tracks follows the band’s debut album ‘The Pawn That Took The King ‘ and live shows with In This Moment, Jinjer, Act of Defiance, Sylosis, and many more.

‘Hush’ is a conceptual album made up of short stories that reflect on modern society. Each song tells a different tale, with some lyrics leaning towards fantasy and others possibly too close to unmasking the truth. Yet while the songs may tell their own individual stories they are all tied together by one overarching concept based on Mental Health. Thematically the album deals with how we deal with mental health as individuals and how society perceives it as well as interferes with it. Self sabotage, the self destructive society that we live in, sleep deprivation, religion being used as a form of manipulation, as well as personality disorders.

The poignant lyrics are married to heavy yet melodic soundscapes that are shaped around songs filled with gripping hooks and vocals that effortlessly switch from light to shade throughout this 10 song, red hot, heavy metal nirvana.

Co-produced by the Glaswegian band and producer Riccardo Daga at Titan Lab Recording Studio in Ferrara near Bologna, Italy,  ‘Hush’ will be released via WormHoleDeath Records on the 27th May. Pre-save it here.