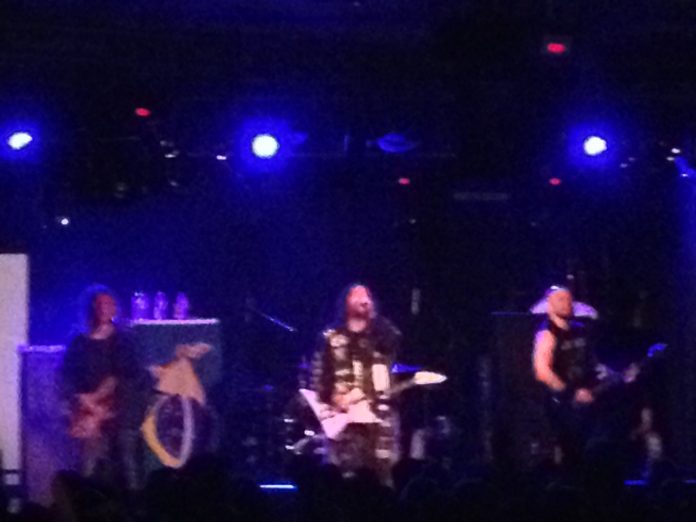 Max and the boys are back. Who can refuse or resist that?

There’s a lot to like about Walsall’s At Dawn We Attack. Playing the Metal Crusade at the start of the summer the Black Country boys impressed everyone by their sheer force and tangible joy at creating a metal rumble which sounded kinda like Lamb Of God would if they ate a plate of Faggots and Peas (note for any readers outside the West Midlands this is a foodstuff….) and had grown up around here. The point is ADWA pass by a blur of big hair, bigger riffs and hefty screams. Pleasingly, they appear ready to smash something – anything – to pieces at a moments notice. “Nooses” is a superb display of heaviness, and frontman Bryan provides magnificent energy – all of which comes together best in the malevolent “Phantom” which ends the set like it’s got business to do. “We are here because of you!” He yells at one point to the crowd. Actually, they don’t just give slots like this away. So, no Bryan. You are here because you deserve to be.

Not for nothing you guess do Soulfly race into this evening with “Frontlines.” Max Cavalera has been living this battle all his life. Right from his death metal days, he’s been fighting to do what he wants to. This is perhaps why he remains such a vital and captivating performer. Which is exactly why, although tonight is the third time in a year Soulfly have been back to this area, the crowd is still all-but sold out.

These days, in Soulfly (staggeringly since 1998) the Brazilian pretty much has modern thrash nailed. They do it their own way, of course, tribal rhythms sit snugly with crushing grooves in work like “Prophecy” which is exactly the sort of record that almost demands screaming out at 90 miles an hour in the fast line. Possibly. It’s not averse to a punk-like sneer either as “Downstroy” proves rather loudly and amply.

Now with Max’s son Igor on bass, the band have never sounded better. Old material such as “Carved Inside” is infused with a real vitality.

A set that is a curious mix of vicious sound and communal spirit, also includes an incendiary medley that begins with a hate filled “World Scum” and leads into “Refuse/Resist” from that band Max used to front and who hadn’t been the same since he left. The song can still make 600 people – some of whom weren’t alive when it came out – lose their collective shit.

Cavalera doesn’t appear to play that song out of duty, but rather because he evidently loves it, as much as he seems to love everything about being onstage. “Bloodshed” runs with deep with all kinds of monstrous anger, but “We Sold Our Souls To Metal” (tonight begun by a snippet of “Iron Man”) is every bit a celebration, of the music he – and we – live and love.

“No” which ends the main set with its euphoric “no more motherfucking Hootie And The Blowfish” chorus, seems rather ironic given that Soulfly are rather more active than Hootie these days, but it’s still a reasonable sentiment, while there’s an airing for Napalm Death’s “You Suffer” – all one second of it – in the encores. Take that Darius Rucker.

As usual, a Soulfly gig is a heaving mass of bodies by the end of “Eye For An Eye” but Soulfly are one of those bands, like Hatebreed say, where it doesn’t really matter whether you know their albums intimately, what matters is something that is almost imperceptible. The vibe. There’s a shared collective experience here that makes Soulfly a wonderful live band. And it seems that’s just how they like it.