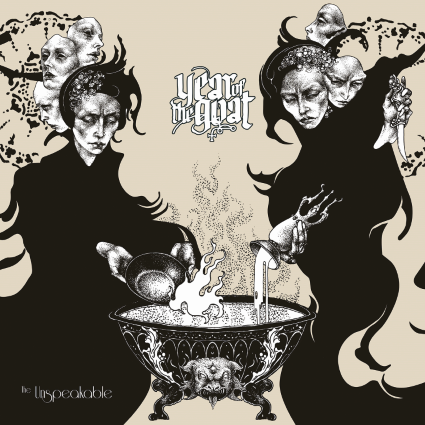 “The Unspeakable” is one of those records that starts as it means to go on and which delivers its knockout blow very, very early on.

It’s stunning – and seriously, it’s jaw dropping – near quarter of an hour opener “All He Has Read” stops at various points from swirling prog to Mercyful Fate, before deciding to just be a classic metal song.

From there, everything else couldn’t really compete, so instead doesn’t try to. Rather it veers off into many darkly wonderful corners. “Pillars Of The South” for example, builds around some lilting harmonies, but before you can get too content “The Emma” is big, lush, macabre and unsettling.

“Vermin” manages to restrain itself, instead of punching your face in like it seems to want to, rather contenting itself with the idea that they should kick Ghost’s arses instead, and there’s even a playful stab at Power Metal, as “World’s  Of Wonder” kicks in with a thunderous stomp before becoming something that Kamelot might approve of.

This is only Year Of The Goat’s second full-length record, which is why perhaps there is such a pleasing lack of focus here. They simply have too many ideas at this stage to become stale. “The Wind” blows through the place like a glorious mash up of Type O Negative and “Host” era Paradise Lost.

There’s no real let up as we head to the end either. The short, sharp “Black Sunlight” is a record that could have come straight out of the 1970s, as is the curtain call of a closer “Riders Of Vultures” which builds and broods, before soaring off.

“The Unspeakable” is a brilliant record. It’s influenced by bands from forty years ago, from Led Zep and The Doors to Black Sabbath, but then so are literally thousands of albums every year. What makes this so excellent is the sheer class on display here. And that really is worth talking about.