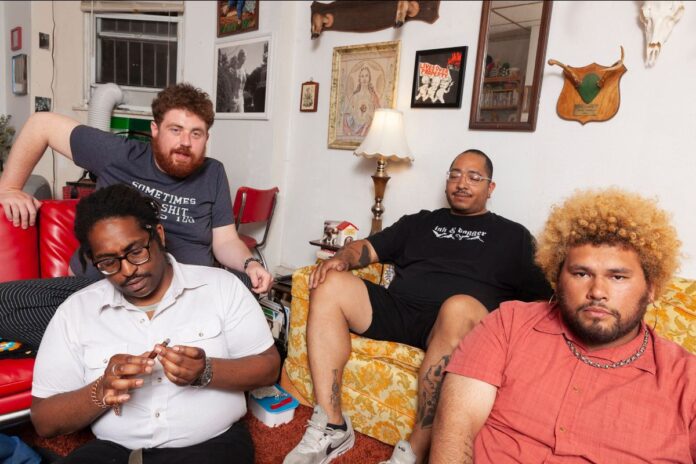 Revolutionary Philadelphia hardcore band, Soul Glo is thrilled to announce their fourth studio album Diaspora Problems due out digitally on March 25th. The album will be available on vinyl via Secret Voice, expected to ship late 2022. Pre-orders are available now, HERE:

Today, the band shares the first glimpse of the forthcoming album with “Jump!! (Or Get Jumped!!!)((by the future)),” a hardcore whirlwind of justified rage, spinning like a verbal circle pit with a steady drumbeat and swirling guitars. Lyrically, Soul Glo examine the disposability of Black art and its creators and the mental anguish of having “big big plans” in a time when a future is not guaranteed. “Many artists feel as though time is a consistent adversary when it comes to the production of their work, but there is a population of people within this group who fear even more the probability of their time permanently coming to a close before they can enjoy the fruit of their labor,” explains the band. “Many Black artists who reach superstar status do so posthumously or have a limited amount of time to establish their legacy.”

Throughout the track, Soul Glo breakdown genre walls blending hip-hop, hardcore, and punk channeling the flow of Migos and Three 6 Mafia mixed with the hardcore likings of Warthog, Converge’s You Fail Me-era, and screamo cacophony akin to City of Caterpillar.

Conceptualized over the course of 2016 to 2021, Diaspora Problems, was recorded in an unfinished warehouse and the band’s practice space during the hottest parts of summer 2021.

The self-produced album explores an artist and individuals’ self-doubt and self-hate, past traumas that can only be worked out in adulthood, financial instability and how it affects an artist, the effects of institutional and state violence, and the power of community that delivered Soul Glo through each struggle the band has endured from their inception and before. Soul Glo’s lyrics are uncompromising, written to raise awareness of social justice issues and designed to make you look inward.

Diaspora Problems is only the beginning of what will undoubtedly be a bright future for Soul Glo, as well as a forecast for what the band is capable of musically. Hardcore punk is at the precipice of a sonic revolution as a higher variance of people find room for themselves and the expression of their lived experience within the genre. More and more people will be injecting a cultural identity and offering a narrative previously unheard and/or underappreciated by punk rockers and kindred spirits the world over. Diaspora Problems is not aiming to be the only album like it that exists, but instead one of many entries in a new dawn for rock music.