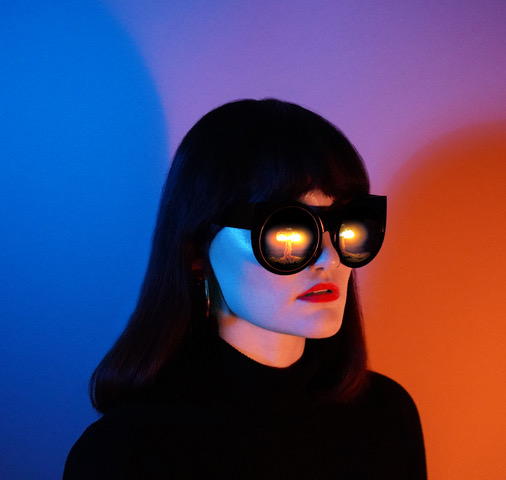 Blood Red Shoes are an English alternative rock duo from Brighton consisting of Laura-Mary Carter (vocals / guitar) and Steven Ansell (vocals / drums). `Ghosts On Tape` is their sixth full-length album and is released this month.

The album opens with `Comply` with some quite disturbing piano keys and a tribal drumbeat joining in. It becomes unnervingly hypnotic with the repeated lyric “I Will Not Comply” which gave it the kind of texture of early Nine Inch Nails sorties. A pounding drumbeat and synth leads us into `Morbid Fascination` with a detached almost isolated vocal delivery which I found so compelling. It sounded at times like a Tubeway Army track with Shirley Manson singing the lyrics. A number that I listened to repeatedly.

`Murder Me` has a detached nigh on distant feel with a haunting ethereal vocal delivery over a grinding beat. A sheer delight. We have a brief soundscape in `(i’ve been watching you)` which seems like static noise akin to tuning a radio.

`Give Up` races along with Steven taking the vocal lead on this post-punk new wave belter that nearly floated off in the latter section. There`s a wonderfully mesmeric quite spellbinding texture to `Sucker` with its continuous underlying beat and piano/synth keys which allows Laura-Mary`s enticing vocals to really shine.

`Begging` has initially a strummed guitar with vocals that seem quite menacing before it veers off and has an unnerving underlying strange repetitive beat with vocals that are full of desire, temptation but charmingly unsettling and troubling. Another brief soundscape follows with distant noise which seems to come closer on `(you claim to understand)`.

`I Am Not You` is a much more belligerent offering with pounding drums, fuzzy guitar riffs and Steven`s vocal reiterating the assertion of “i`m nothing like you” throughout. Laura-Mary adds her dream like tones in the latter part of the number just before it`s conclusion. There`s a noisy opening to `Dig A Hole` but it does have a quite gentle respite as it evolves before resuming its former raucous path. However, it does seem to flit between almost light and shade as it progresses before fading out.

I thought `I Lose Whatever I Own` had a really heavy powerful vibe similar to Kasabian`s `Shoot The Runner` with both singers trading vocal duties in a tantalising captivating style. Ensuring a quite mesmerising listen. A final brief soundscape is shared with `(what have you been waiting for?)` which sounds like a fusion of bees in flight and an aeroplane`s drone.

The album closes out with `Four Two Seven` an evocative number that opens with what sounds like tribal hand percussion or a box drum and vocals relating a personal slant on the act of holding onto the hurt of a broken relationship as that`s all that remains. The pain is almost tangible in the vocal delivery. An interesting and thought-provoking listen.

I was looking for a way of wrapping this review up and saw what the band shared and it really sums it up “We have made an entire career out of being told what we are ‘not’, of being rejected, of not fitting in, and this album is us deliberately pushing into all of our strangeness, emphasising all of the things that make us different. Ultimately this album is an invitation. It’s us saying, this is our world, these are our darkest thoughts and feelings – our ghosts – caught on tape. You are welcome to join us. Come and embrace the strange.”

This album is a cracker and it will be no surprise when I see it namechecked in all the best of listings at the end of this year.