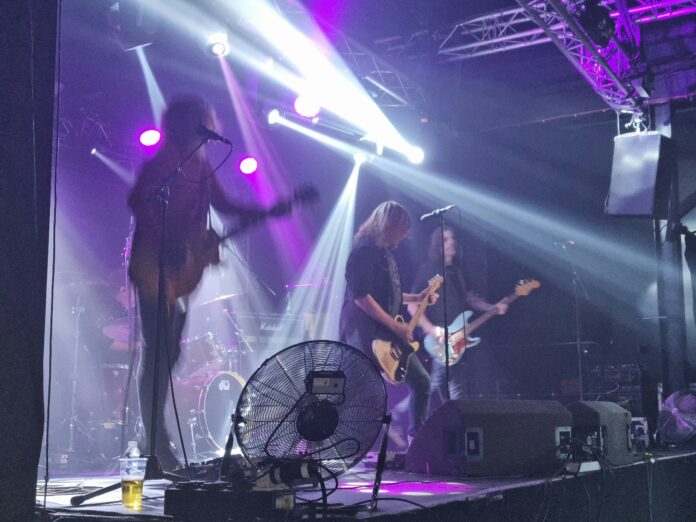 “I’m 60 years old,” reasons Art Alexakis – the beating heart of Everclear for 30 years and the only original member on stage – “and I only do things that bring me joy.” He explains that this means “I won’t play gigs for people that don’t like the band, so they can throw shit at me….”

He’s amongst friends here, on the last night of this UK run – their first for almost a decade. Everclear are one of those bands, I guess, that people when they got into them stayed with them. MV did. So, cards on the table here, lets ‘fess up. Everclear are one of my favourite bands. Always will be. That means that when “So Much For The Afterglow” kicks off tonight, I can remember instantly who “this is a song about” (its first line) was about, to me.

Fittingly, given that I’d been a fan since 1995’s “Sparkle And Fade” record, tracks from that are played, and “Heroin Girl” can still rouse emotion, but it’s a very different band these days. Not just in personnel, but a combination of age, experience and Alexakis’ health issues, means they might lack the visceral energy they used to have, but there’s no doubting the emotional pull of tracks like “Father Of Mine”.

Because this tour is a celebration of a career, they go right back to the star for “Nervous And Weird” from their debut album and they’ve invited requests from fans as to some songs to include. Some of these are favourites anyway “Strawberry”, the heart rendering track from “….Fade”, or “Sunflowers” are both often played, but whoever picked “Blondes”, from the rare “White Trash Hell” record pulled a blinder out of the bag, frankly.

“I Will Buy You A New Life” is still for anyone who dreams of an escape – the passion with which they deliver the line “you’ll never know the joy of a welfare Christmas” comes from deep. “A.M Radio” even after all these years is as catchy as it gets, and at the other end of the scale, the fragile “Songs From An American Movie” is dedicated to his daughter, and given that you feel you know Art through his art (as it were) you are grateful he’s found peace and serenity in his life.

Not that it stops you screaming the chorus to “Santa Monica”, the last track, as it hits. The huge it, it still feels special, and in the words “you’ll swim out past the breakers and watch the world die”, there’s an odd beacon of hope, and it’s the band itself. Everclear probably never thought they’d be here, so far from home, when they released their debut in ’92. Yet, here we are. And that deserves recognition.

During Everclear’s set, Art Alexakis had told a story about watching Soul Asylum “every time they came to LA, way before they were famous. They were one of the best live bands around even then.”

As you watch Dave Pirner and the 2022 vintage of the group ripping through “Somebody To Shove”, all the evidence points to the fact he might be right.

That was the opening track on “Grave Dancers Union”. The 1992 record that propelled them into the big time  – what else do you call 2 million sales in the US alone? It is that album too, which provides the backbone for the set here.

But the band were always something of “rock’s longest serving overnight sensations” if you will and there’s plenty of superb work to be had elsewhere. “Shut Down” the brilliant “String Of Pearls” and “Misery” for example, all showcase the class on the “Let Your Dim Light Shine” album.

It’s all delivered with an impressive lack of image and pretence. Ryan Smith is superb on guitar but doesn’t seem to have the ego that comes with that usually, while Pirner is content to tell his jokes between songs where many would go into “preacher mode”.

That approach of “what will be will be” seems to extend to their set too. No obvious chest beating bravado and crescendo, like you’d usually get from mega-selling US acts, instead Soul Asylum, litter the thing with gems at periodic intervals. So there’s “Summer Of Drugs” or “Bittersweetheart” or “Never Real Been” just sort of casually tossed out, where most would make a big deal of it.

Nowhere is that better shown than on “Runaway Train”. The one that made us all buy “….Union” and staple of MTV back in the day. Encore material, if ever there was. Not here. And that’s just fine, indeed, they arguably make more fuss about “April Fool”.

That might come from the fact that they switch the set around every night and it doesn’t seem choregraphed to within an inch of its life like some shows do. It seemed to be off the cuff – and that is a skill in itself.

Typically, even after “Just Like Anyone” – the one before the encore – there’s no real farewell. In that context it’s strange they even encore (maybe that’s their one concession to rock star cliché?), whatever, the two they finish with, starting with “Never Really Been” are mighty examples of what they do. Lyrics that no one else would write, harmonies as tight as you like, and work which almost seems to worm its way in without you noticing.

It’s fitting that on this last show, “Sometime To Return” is the final number, the set that proceeded it, though, was one that showed that whilst they’ve got the songs to bother the arenas back home, Soul Asylum are the proud outsiders, doing it their way.