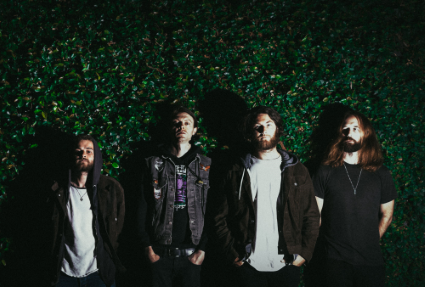 “Regular dudes” who release superb fuzzed up record next month

They all agree, “We’re pretty much just regular dudes who want to play loud, drink beers, and smoke weed.”

Scott elaborates, “I had been collaborating with lots of different people and trying stuff out. With Nick, something clicked, and it was exciting.”

In between a party or two, they conjured up quite the intoxicating sonic stew.

“The sound is somewhere between doom and psych rock,” Nick explains. “We’re slow, heavy, and a little cosmic. We’re not afraid to experiment. However, it’s always fuzzy as fuck.”

In between constant gigging and opening for the likes of Truckfighters, they cut a demo and uploaded it to Bandcamp. RidingEasy Records caught a listen and offered the band a deal. Now, 2015 sees them release their five-song self-titled first opus.

On Holy Serpent, tracks like the eight-minute ‘The Wind’ roll from six-string brooding into strangely enticing soundscapes augmented by ethereal vocals. “The lyrics talk a sort of alternate history of mankind’s beginnings,” says Scott. “It’s a story of ancient alien gods visiting the race they created years ago – humans – through controlled inter-species breeding. Acting as true gods, they have returned to see how the experiment is going and make their judgments upon the earthlings. We get into some of those unexplained mysteries and conspiracy theories. It’s quite the journey.”

‘The Plague’ infects with a barrage of guitars and a cathartic slow swing. Then, there’s ‘Shroom Doom’, which lives up to its title by elegantly bridging the gap between sludge and psychedelica complete with a searing, fretboard-burning guitar solo. “That one is about the general highs and lows of life,” continues Scott. “You find inner peace and the drive to continue on the right path when faced with adversity and hardship. It’s a song of reflection and uncertainty veiled by the comforting realization that were all in this together.”

Holy Serpent are about to slither their way into the collective consciousness of likeminded souls around the world. “The name’s got these big connotations,” Nick leaves off. “It’s like this is something bigger than us. We want people to take this ride with us.”

Tune in and turn up Holy Serpent.