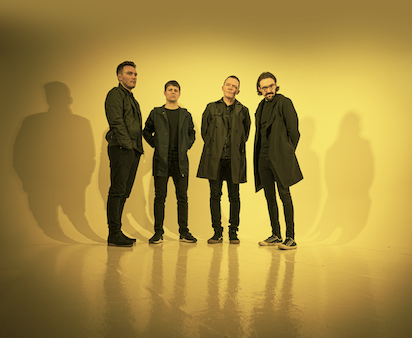 The Slow Readers Club today share their new single ‘Modernise’. It’s the second track to preview the Manchester band’s new album ‘Knowledge Freedom Power’, which follows on February 24th. The record is their first full studio album since ‘The Joy Of The Return’ became their first to crash into the Top 10 in 2020.

As the opening track to ‘Knowledge Freedom Power’, ‘Modernise’sets the agenda that emerges as the rest of the album unfolds. It presents a post-capitalist dystopia in which the demands of technology, automation and always-on work culture overwhelms the individual until prayer becomes the only possible salvation. And yet the album’s undercurrent of hope and defiance offers an alternative -it’s not too late to take a stand. Sonically it’s completely in tune with its subject matter, as ultra-precise electro beats and a buzzsaw industrial-synth riff fight for prominence with the raw humanity of Aaron Starkie’s vocal.

The band commented, “‘Modernise’ is about the constant need to learn and adapt to changing, it’s a bit of a techno fear song.” As with the rest of the upcoming album, ‘Modernise’ was written by the band, with production from Joe Cross (Hurts, Courteeners, Louis Tomlinson).

‘Knowledge Freedom Power’ was launched alongside its title track, which continued the critical acclaim and cult adoration that has become a hallmark of their career. Premiered by Chris Hawkins at 6 Music, the track received further airplay at Amazing Radio and XS Manchester, was added to Apple’s New in Alternative playlist, and received news coverage from Louder Than War, Live4Ever and Atwood, who described it as,”an exhilarating, energizing anthem that seeks to spread a little more light and love in the world.”

The two songs provide an insight into what to expect from the ‘Knowledge Freedom Power’ album. Its hybrid of strident synth-rock and anthemic alt-rock recall feels like a kindred spirit to Muse, White Liesand modern-dayBloc Party as The Slow Readers Clubstep into a new future -both stylistically and thematically.While it’s a warning sign of the potential imbalance between mankind and machine, it’s also a positive declaration that the future is still ours to dictate. As we’ve seen in the past, using knowledge in the pursuit of freedom and power will be just as vital in the years to come.

It will be released on blue vinyl, CD and cassette, as well as digital and streaming formats. Album bundles including new merch designs and signed art prints are also available from the band’s official store.

The Slow Readers Club recently added a very intimate show at The Metin Buryas part of Independent Venue Week, which quickly sold-out. Ticket demand for the remainder of the tour is also strong, most notably with a homecoming show at Manchester’s Albert Hall, which sold-out four months in advance. Remaining tickets for the tour are available here – https://www.musicglue.com/theslowreadersclub/live-dates