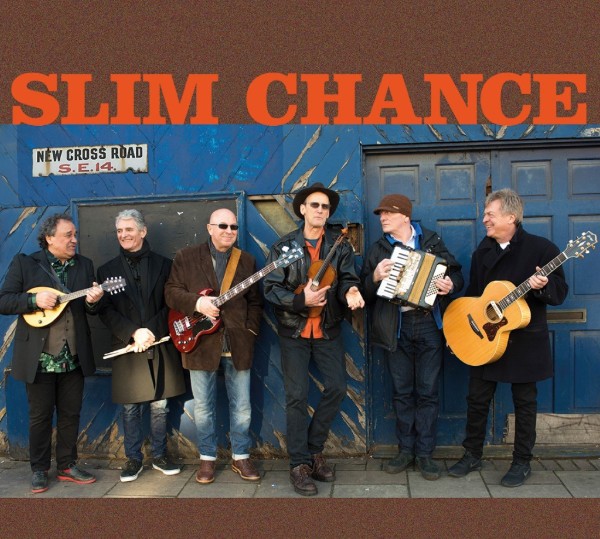 Slim Chance are delighted to announce the release of their new album ‘New Cross Road’ which will be available on 18 January 2019 from Fishpool Records, distributed by Cargo. Slim Chance features the talents of Steve Bingham, Charlie Hart and Steve Simpson from the original line-up of the band formed by Ronnie Lane. ‘New Cross Road’ features a sublime collection of Ronnie Lane songs, plus new band originals and a cover of ‘Squeeze Box’ by Pete Townshend. This is the band’s third album since reforming in 2011, and follows ‘The Show Goes On’ and ‘On the Move’.

‘New Cross Road’ features a true blend of styles and feel, with material being drawn from Ronnie Lane’s repertoire and of course from within the band itself. There are strong writing talents in the band, notably Billy Nicholls and Geraint Watkins, as well as Steve Bingham and Charlie Hart, all of whom contribute to the album. ‘Flossie Lane’ was written in honour of Ronnie’s namesake, the notorious Shropshire publican. ‘Chicken Wired’, ‘Annie’, ‘Debris’ and ‘Spiritual Babe’ all boast credits for Ronnie Lane.

Pete Townshend said, “It’s a really hearty and real collection. Fantastic sounds, excellent production”. Slim Chance themselves said of the album, “Whilst we’ve built up a great reputation as a live band we really wanted to return to the studio and create an album that really reflects not only where we came from, but where we are. We feel ‘New Cross Road’ does just that and we couldn’t be prouder of it”.

The stated aim of this line-up of Slim Chance is to celebrate the range of Ronnie Lane’s later music and with ‘New Cross Road’ that legacy is duly honoured as well as expanded by the band’s own songwriting .
TRACKLISTING