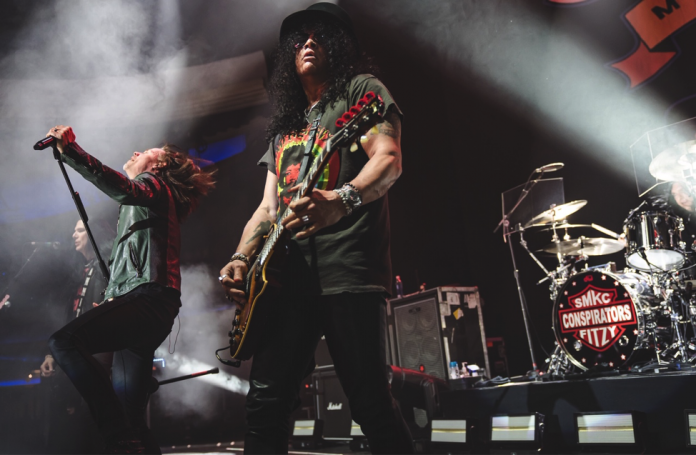 The iconic, GRAMMY-winning guitarist SLASHand his band SLASH FT. MYLES KENNEDY AND THE CONSPIRATORS wrapped their nationwide, sold out headlining tour — their first in four years — on Tuesday night (16th October) at the Palladium in Los Angeles (more photos below). The group ripped through a 22-song, electrifying two-hour show which included a special guest appearance from Duff McKagan (set list below). The band which, in addition to SLASH and singer MYLES KENNEDY, includes TODD KERNS (bass), drummer BRENT FITZ (drums) and FRANK SIDORIS (rhythm guitar) will continue touring worldwide in support of their acclaimed new album LIVING THE DREAM which spawned the first single “Driving Rain”, and is officially a Top 5 hit at USA Rock Radio.

Just in time for Halloween,SLASH has released a brand new,
7-song playlist titled UNIVERSAL MONSTERS MAZE SOUNDTRACK. Fans can enjoy the spooky soundtrack as background music to usher in Halloween night on Spotify, Apple, Pandora and Amazon HERE. SLASH composed the original music for Halloween Horror Nights ‘Universal Monsters’ Maze which fans can experience live at Universal Studios Hollywood from 18-21, 25-28, 31 October and 1-3 November, 2018. The ‘Universal Monsters’ Maze pays homage to iconic classic Monsters by underscoring each of their unique attributes and reimagining them into terrifying modern-day characters. The Wolf Man, The Invisible Man, The Phantom of the Opera, Dracula, Dracula’s Bride, Frankenstein’s Monster, The Bride of Frankenstein and The Mummy are among those featured, to which SLASH composed a unique, complex composition adding a haunting dimension to the experience. Guests can purchase tickets for “Halloween Horror Nights”here: Hollywood.HalloweenHorrorNights.com.

“As a fan of horror movies and of ‘Halloween Horror Nights’, I jumped at the chance to once again collaborate with Universal Studios Hollywood to produce a soundtrack for the maze,” said SLASH. “Similar to the way music affects a film, I wanted to compose a score for the legions of infamous characters featured in the maze to elicit a greater sense of terror. In the end, the goal was to ultimately make the guests feel as if they are playing an integral role in a classic Monster movie.”

Previous article
SLIM DOWN
Next article
ELUVEITIE’S WORK OUT