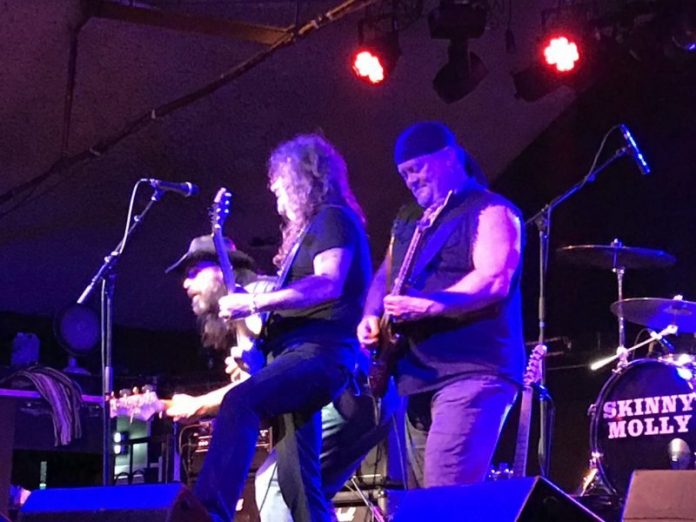 They’re here for a good time. Even on a Monday night 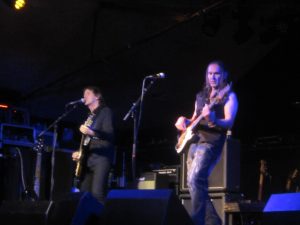 When MV saw Skinny Molly a couple of years back , the support band was Worcestershire based three-piece Heavy Oil. So good they did it twice, the boys are back this time as well. “Standing In The Road” pops in with a heavy bass groove, “Rocket Fuel” is positively filthy blues and this is classy, classic rock with a nod to bands like Bad Company, Free and Whitesnake. The trio very obviously have a deep love for what they do, too and that comes through in a 40-minute set. “Save Yourself” is their slowest one, but singer/guitarist Lance Perkins is spot on when he smiles that the band aren’t noted for their ballads and it still manages to sound pretty muscular. One of those bands that are not trying to re-invent the wheel, but don’t half enjoy driving the classic car, Heavy Oil are at their absolute best on work like “Gasoline And Sugar” and their closing eponymous song. Three-piece bands usually sound just right, and Heavy Oil are no exception.

The depth of Southern experience on stage when Skinny Molly come to town is pretty much second to none. Skynyrd? Check. Blackfoot, yeah no worries. The Grand Ole Opry? Yep, that too.

All of which means the chaps have no real need to be grateful when punters turn up on a Monday night. Yet, here they are. On a miserable evening in the Black Country, dedicating a song to the faithful: “We are thrilled to see you here, this one’s for you, it’s called “For Y’all”. Says Mike Estes. He of Lynyrd Skynyrd fame.

And that in a nutshell, is why Skinny Molly are so very, very good. Talent, skill, great songs, and still retaining a real humble attitude.

The ethos of the show is summed up by the first song. “Here For A Good Time”. Is more than title track of their most recent record, and the feeling of a Honky Tonk in the deep south is never far away, especially when they play songs like the wonderfully defiant “I Don’t Care” which distills them into four minutes.

Fine musicianship abounds, but never better than on “When The Going Gets Tough, The Tough Go Fishing” as Jay Johnson – of Blackfoot –  plays a superb solo, while the blues infused “Me And The Devil Himself” is a change of pace.

There is a carefree feel. “Two Good Wheels” suggests that “this is how real freedom feels” and it could be that it is also why they stay on the road.

Because of their history, there are plenty of opportunities for covers too. “Devil In The Bottle” and “Call Me The Breeze” show that Skynyrd are the godfathers, on the other hand “Train Train” sees those who loved Warrant get nostalgic (they covered it before MV realised it was a cover…..).

It’s not just those, though. “Copperhead Road,” a rocking “Dead Flowers” and “Wishing Well” are amongst the standards aired elsewhere. They end with another cover, too. Perhaps the greatest of them all, “Free Bird” is done thorough justice – and comes complete with the full conclusion too.

But it doesn’t really matter what they do, originals or a de facto classic rock disco. Skinny Molly do it just right. They remain one of the finest and most authentic of all the southern rock bands around.