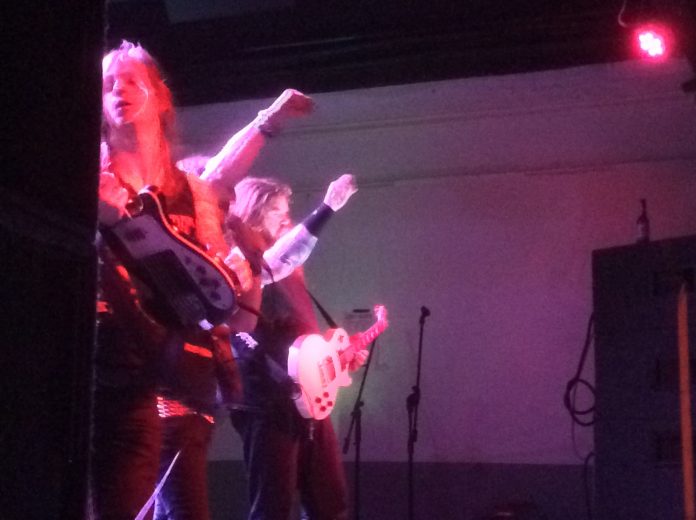 The heaviest tour of the year so far?  Maybe. Metal is brought back to its birthplace

Burden Of The Noose sum their feelings up thus: “We’d be excited enough to come down to this show,” says singer Andy Barraclough. “Let alone play it!” That evident joy comes over in their charged up performance, which is equal parts Southern Sludge and good old fashioned British grind. Regulars on the West Midlands scene, the local lads are getting better and better and tonight they are at their pummelling best.

Brooklyn three piece Mortals are, if anything, a notch up in heaviness, which trust us makes them very heavy indeed. The all-female trio have a serious, almost death metal sound, leavened a little by sounding like a very angry Kylesa (with whom they share a record label) in places. There is a bit of everything here, black metal, sludge, even some crust punk influence. It all makes for an interesting mix of styles that could jar in the wrong hands, but not here. Guitarist Elizabeth – an author and former web editor with New York Magazine – handles the vocals jointly with bassist Lesley, and between them they can strip paint from walls. The music rattles and rumbles in the right places and Mortals are very obviously a extremely driven band. Their set is unremitting and uncompromising.

Which brings us rather neatly to Goatwhore. With no preamble, no backing tapes and nothing approaching a fuss, the veterans – as they can now be classed – are just tuning up one minute and channelling all kinds of who knows what straight after, and doing just that for the next forty five minutes. Singer Ben Falgoust is imposing, with his huge frame and long, flowing brown hair whirling round as he headbangs incessantly. He conducts this madness like some malevolent ringleader, while fellow founding member Sammy Duet fires out the riffs at breakneck speed.

There is quite simply nothing fake about these men at all. “FBS” drips with evil, but is underpinned by a huge fists-in-the-air groove that sums their sound up perfectly. Unmistakably from the Deep South, but simultaneously sounding nothing like their obvious contemporaries, this is old school in the way Venom are, but interspersed with some NOLA ingredients.

Largely, however, this is fast, brutal and very, very loud, the interplay between guitar king Duet and the air guitar king Falgoust making Goatwhore a thrilling band to watch. When they slow down it is only to become even more crushing. They are at their best, though, when turbocharged.  “Judgement Of The Bleeding Cross” begins in a whirlwind and gets more chaotic from there, it is metal at it’s purest.

“Collapse In Eternal Worth” by contrast, is nothing more than a terrifying white knuckle ride and the rest of the set doesn’t pause for any kind of breath, stopping only for the suggestion that we raise our “fists in the air like its a Priest concert in 1984” as the appropriately named “Apocalyptic Chaos,” finishes an outstanding and brutal set.

It’s been all change in Skeletonwitch. Since the shock news that singer Chance Garnett had been fired – even forcing the band to play some instrumental shows before Christmas – ex Cannibis Corpse man Andy Horn has been announced as vocalist for this European run of gigs.

Horn makes for an engaging, if shall we say, rather eclectic frontman. “This one goes out to anyone with their hair tied back right now, just let it loose” he says before an incendiary “Upon Wings Of Black” which proves if nothing else, that whatever their trials and tribulations have been this past few months, Skeletonwitch are still firing on all cylinders.

It helps that the four other members of the Athens, Ohio band are still here and still know their jobs, which means that with songs like the apocalyptic “Beneath Dead Leaves” still a swirl of twin guitar metal with a dose of something putrid on top, there’s very little wrong here.

“This Horrifying Force (The Desire To Kill)” passes by in a blur of noise and “Crushed Beyond Dust” lays waste to most things, and would salt the Earth on its way just for fun if it could. “Unending, Everliving” starts with a kind of doom intro, then decides that a fast beating is just more fun, and “Cleaver Of Souls” is aptly named.

As they appear to cram as many songs into their hour as possible, the fierce trio of “Beyond The Permafrost,” “Of Ash And Torment,” (which Horn ushers in thus: “thanks for coming, it’s actually my first time seeing Skeletonwitch.) and “Within My Blood” conclude things.

There are shows when there’s light and shade around. There are nights when bands get introspective and – whisper it quietly here – strum acoustics. Tonight isn’t one of those. Instead tonight something else entirely. It was bleak, it was brutal, it was angry and it was thrilling.