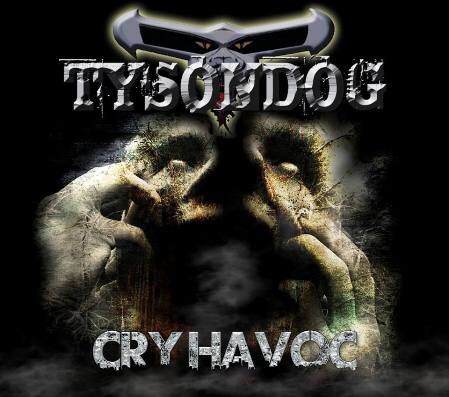 Old dogs, new tricks and all that.Reformed North East still pack a punch after all this time

Back in the 1980’s, right at the zeitgeist of the British Heavy Metal boom, in fact, Tysondog came blinking into the light. Tipped by luminaries such as Malcolm Dome for world stardom, it never quite happened for the North Easterners the first time around and they eventually called it quits in 1987.

Not unreasonably, it was assumed that the band were done, until that is when in last the middle of last summer it was announced they had signed to Rocksecktor Records, with a line up that included a couple of new members in Steve Morrison on guitar and Phil Brewis on drums and would be recording new material.

Off the five piece went into the studio under the stewardship of Jeff Dunn. Dunn is better known as Mantas of the legendary Venom, but is now plying his trade in M:Pire Of Evil. This fact is perhaps rather more important than you might think, given that Evil are rather more modern sounding than you might expect, given his trad history.

And the same is true of Tysondog.

Often when bands of this, shall we say, vintage, get back together, all they do is a rather lukewarm, unappetising rehash of those early 1980s sounds, but credit to them on “Cry Havoc” they’ve rather neatly swerved such a fate altogether.

In every respect, “…..Havoc” is a modern feeling record. The title track, which begins things, tells you as much. A rather eerie sounding opening gives way to a muscular groove that sounds something like Blaze Bayley at his best.

What follows is in a similar vein. Lyrically it’s angry sounding, “Parasite” is infused with a real snarling urgency and a very tight opening riff – it’s something of a trademark of the record that introductions are usually killer, “Into The Void” in particular does this job brilliantly – and “Playing With Fire” is fast, almost thrash like.

A strong, consistent set of twelve songs, there are nonetheless a couple of real highs. “The Needle” could have come straight off The Almighty’s “Powertrippin'” album, and the lengthy “Cold As Ice” concludes the album superbly, with it’s grandiose opening, chugging verse and simple chorus.

A vastly different album to what you may have expected if all you had done was read the bio, “Cry Havoc” is a superior album of modern British Heavy Metal. It is a comeback of which all can be proud.

Previous article
Get a taste of Khors
Next article
SKELETONWITCH , Goatwhore, Mortals, Burden Of The Noose @ The Oobleck, Birmingham 14/4/15