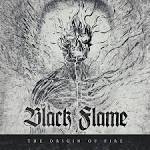 Going through the odd financial crisis or two can be very bad for a country’s economy. However, its does wonders for the musical output. Italy’s fiscal problems have been well documented over several decades and the infrastructure always appears to be one mis-step away from total collapse. When times are tough you can always rely on the underground scene to rise up and take a stand.

Not many bands rise up in quite the same style as the Occultist Blackened Death purveyors Black Flame. This band burn a hole through the modern musical landscape and leave the posers and populist chart fillers choking on their cinders.

“Wandering Hermit” is a subtle yet unsettling introduction to the album. It does however set the scene perfectly for the all-consuming darkness of “My Temple of Flesh”. The black metal intensity and faded heartbeats are all very much in check but with an added rhythmic quality that is often found only in the genre’s standout artists such as Behemoth, Watain or Marduk. Unlike many Black Metal albums this doesn’t rely on atmosphere to create its imagery instead relies on gritty and guttural power and fine musicianship to achieve its demonically deathly aura.

“Unholy Cult of Rejection” provides a more a-typical black metal experience. Whereas “Under The Bridge of Illusions” treads a far more death-orientated path. Both are fine examples of what the band do best. Crushing intensity backed up with razor-sharp melodies and traditional soundscapes.

Of the 10 tracks on offer perhaps the final track “Lucifer Rising” is the most ethereal and out-of-kilter with the rest of the album. It’s a 5 minute instrumental piece that echoes the end of times. Darker times. Old school Pink Floyd fans would love this track, maybe not the rest so much but as an album closer it’s a breathtakingly simple statement.

Listen to the flame burn.