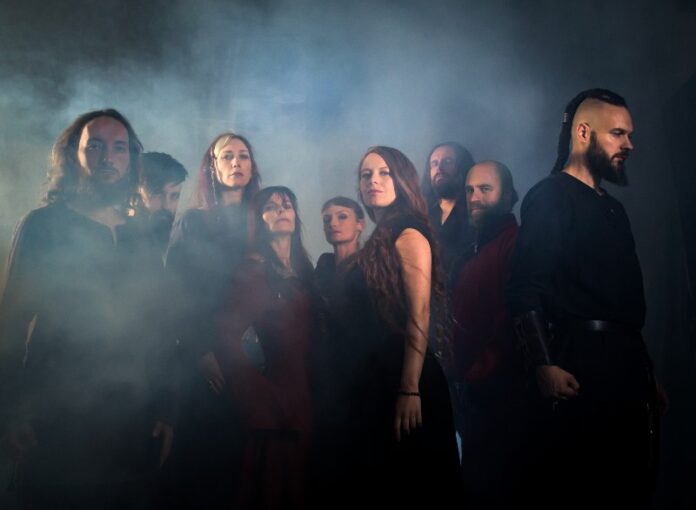 French Nordic-themed cultural collective SKÁLD have released a visualiser for their new single ‘Då Månen Sken’. The track is taken from the band’s upcoming full-length release Huldufólk, due 20th January 2023 via U Music.

“‘Då Månen Sken’ is a ballad that tells the story of a skogsrå, a forest nymph, who bewitched the young Björn. Björn was a tall, handsome boy on his way to a party one fall evening. On his way, he met this nymph who bewitched him. He will end up alone and melancholic, obsessed by the sound of the forest.”

To cross the lands and forests of the hidden people is to risk losing one’s life, or to be trapped in a bewitching elven circle. In this elven circle, humans find themselves bewitched, in a trance, caught in a hellish loop of dance until exhaustion, oblivion or death. The music video illustrates this dance of tow powerful spirits of light and darkness, which symbolises, in a poetic way, the beliefs of the Icelandic folklore of the Huldufólk. Te possessed human is condemned to get lost eternally in the legendary bewitched path that protects the access to the other world.

The album artwork is a tribute to the Swedish painter John Bauer and his illustration titled ‘Princess Tuvstarr’, gazing down into the dark waters of the forest tarn. His work mainly focused on landscapes and mythology, but also portraits. His best known illustrations are of Bland tomtar och troll, (Among Gnomes and Trolls), an anthology of Swedish folklore and fairy tales.