Sigh Bring Out The Big Guns For New Album 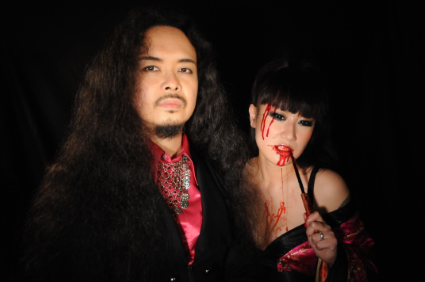 Members of Trivium, Dragonforce and Rotting Christ are all on new release

Two and a half years were required to finish up Sigh’s 10th studio full-length album “Graveward”, which embraces everything from vintage keyboards such as Minimoog and Fender Rhodes to real orchestral instruments. Each song ended up in having more than 100 tracks and the total amount of the sound data exceeded 100GB. “Cinematic Horror Metal” should be the best phrase to describe this most layered grandiose album in Sigh’s history.

Inspired by a little chat with Fabio Frizzi, well-known for his legendary works for Lucio Fulci’s movies like “The Gates of Hell” and “The Beyond”, “Graveward” was composed as a homage to Italian zombie flick classics, Hammer Horror Films, and King Diamond. Of course the musical influence is as wide as ever including aforementioned horror soundtrack composers (Fabio Frizzi, Goblin, James Bernard, Jerry Gold Smith, and John Carpenter), and their roots (Schoenberg, Webern, Stravinsky, Bartok, and Charles Ives), left-of-center rock / metal artists (Celtic Frost, King Diamond, The Beach Boys, Magma and Frank Zappa), Free Jazz (Sun Ra, Albert Ayler, and Peter Brotzmann) and some Central Asian traditional music.

“Graveward” is a big step forward from Sigh’s past albums in every aspect. The biggest evolution was brought by You Oshima, who joined Sigh as a new guitarist in 2014. He is known for his own project “Kadenzza”, who released two albums via France’s Holy Records so far. What he brought to Sigh is not only the new dimension of the guitar playing but his outstanding skill of mixing the songs. As he has his own studio, we were able to take whole three months to mix up those hundreds of tracks properly.

“Graveward” welcomes various guest musicians including Matthew Heafy from Trivium, Fred Leclercq from DragonForce, Niklas Kvarforth from Shining (Sweden) Sakis Tolis from Rotting Christ, Metatron from The Meads of Asphodel and so on. The cover artwork was done by Costin Chioreanu, who worked with Ihsahn, At the Gates, Deicide and Ulver.

1. Kaedit Nos Pestis
2. Graveward
3. The Tombfiller
4. The Forlorn
5. The Molesters of My Soul
6. Out of the Grave
7. The Trial by the Dead
8. The Casketburner
9. A Messenger from Tomorrow
i) The Message
ii) Foreboding
iii) Doomsday