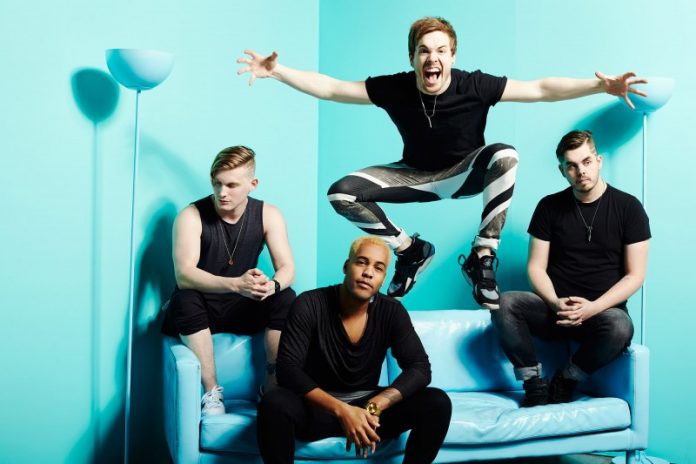 Set It Off is back and better than ever, with the release of ‘Uncontainable’ – a new song and music video about perseverance and overcoming adversity – that’s premiering now at setitoffband.com!

“If there’s one thing Set It Off knows it’s struggle. We know nothing worth having in this life comes easy and there have been many instances and many people in our lives lately that try their best to bring us down. This is our message to those people that force their way into our lives to try and break us – you won’t,” declares vocalist Cody Carson. “Bring it on, we’re Set It Off and we never back down from a fight. This is only the beginning, so turn up our new song ‘Uncontainable’, feel the energy, and take over the world.”

‘Uncontainable’ will be available as a single on digital accounts such as iTunes and Spotify on Friday, March 18.

The Tampa, FL-based pop outfit has just wrapped up the recording of their new full-length, which will be released this Summer and has already been noted as one of the “Most Anticipated Albums of 2016” by Alternative Press. The album was recorded in Los Angeles, CA with producers Brandon Paddock (Panic! At The Disco, Avril Lavigne, Pentatonix), Erik Ron (Saosin, Panic! At The Disco) and Mike Green (5 Seconds of Summer, All Time Low, Cassadee Pope).

“‘Uncontainable’ is just the tip of the iceberg. We’re very proud of this song and this video but as far as we’re concerned it’s just going to get better from here,” shares Carson. “We can’t wait to show you all of our new songs, we’ve never had a team so excited about anything in our lives. So be patient and prepare yourself for the best record Set It Off has put together to date!”

Set It Off is now half way through their incredible Fight For Something Tour – a full US co-headline tour with Australia’s Tonight Alive that has seen massive, sold out shows in New York City, Boston, Buffalo and more. All upcoming tour dates can be found below and additional information can be found here: thefightforsomethingtour.com.

Prior to entering the studio, Set It Off wrapped up a massive run of tour dates all throughout the world including the entirety of the 2015 Vans Warped Tour in the US, a Canadian tour with All Time Low, and a European/UK run with Mallory Knox.