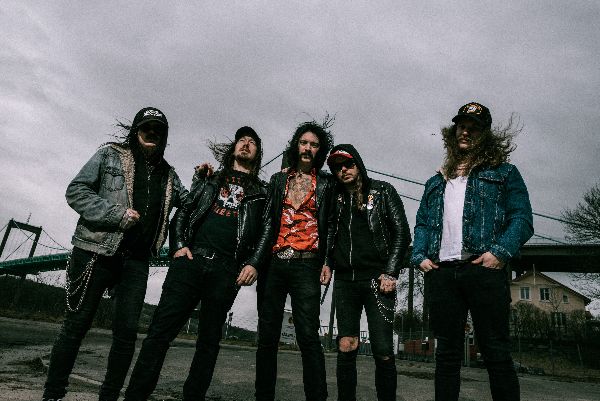 Ever since they started the band in 2014, the guys in Scumbag Millionaire have been talking about releasing a b-side compilation. In the past eight years they have released over 25 vinyl singles, including split releases with bands like Electric Frankenstein and an Iggy & the Stooges tribute 7″.

“We simply love 7″ singles. The format is amazing, with just one song on each side. And also the size of it. It’s an item you always can afford at the merch table. What’s not to like?” – Adde

All these releases have incredible artwork, come in different vinyl colours, and contain B-sides that were not available anywhere else… Until now!

Coming February 17th 2023 on Suburban Records: Barely Alive! B-sides and Oddities. In their own words: “We’ve selected sixteen tracks especially for this release, which was not an easy task, considering the amount of releases. But we’re 100% confident we’ve put together a kick as compilation album for you. We decided to press the record on black, 140g vinyl only. Old school, no bull shit, no limited editions, no CD.”

Today, the band releases Strike Me Down. Taken from Barely Alive!, the song originally appeared on a split single with Electric Frankenstein. “This was the first time we worked with Pontus. He brought his studio gear to our rehearsal space and we recorded three songs. It’s such a great thing having the studio come to you, and not the other way around, like it usually is,” the band says about the song.

High energy action punk, straight out of the gutters of Gothenburg, Sweden! Scumbag Millionaire first generated a buzz back in 2014 with their single Full Speed Go, a song about Charlie Sheen’s drug abuse. In 2018 they signed a record deal with Dutch label Suburban Records (Bad Nerves, The Sore Losers, Peter Pan Speedrock) and released their debut full-length Speed, produced by Micke Nilsson. The follow-up Poor and Infamous (2020) was recorded at Sunlight Studio with producer Tomas Skogsberg, and features guest vocals by Jennifer Israelsson (Hot Breath) and Elin Larsson (Blues Pills).

Originally inspired by bands like the Hellacopters and Turbonegro, Scumbag Millionaire started out as an extension of the classic Scandirock scene. Nowadays, they can be seen sharing stages with bands like Zeke, Hardcore Superstar and The Good, The Bad & The Zugly and playing festivals like Welt Turbojugend Tage, Flanders Chopper Bash and Stoned from the Underground.

Previous article
MOLE IN THE CAMP
Next article
GOTH THE LOT