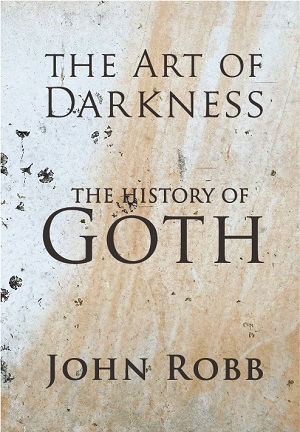 The first ever complete overview of Goth culture will be released in March 2023.

Finally, after a decade of work, countless interviews and immersing himself into the culture, John Robb’s definitive book is a journey deep into The Art Of Darkness. The first in-depth book on Goth is a deep dive into the enduring culture and the social, historical and political backdrop that created the space for The Art Of Darkness to thrive.

A deep dive that takes in the fall of Rome, medieval gothic architecture, dark folk tales, romantic poets, Lord Byron, Aleister Crowley and march more before accelerating through the Doors before arriving at the classic post punk period.

The book comes with interviews with the likes of Andrew Eldritch, Killing Joke, Bauhaus, The Cult, The Banshees, The Damned, Einsturzende Neubauten, Danielle Dax, Johnny Marr, Trent Reznor, Adam Ant, Laibach, The Cure, Nick Cave and many others, this is the definitive walk on the dark side and into the very heartland of Goth.

The shadow of Goth is now everywhere and The Art Of Darkness is central to these dystopian times…but where did it come from?

Every generation has got to deal with the blues – embrace the melancholy. Find a beauty in the darkness, a poetry in sex and death…

Whether it’s the Roman love of ghost stories, European macabre folk tales of the Middle Ages, Romantic poets, or the original Gothic tribes sacking the Eternal City, a walk on the dark side has always had its attractions. In the post-punk period, Generation Xerox saw music, clothes and culture come together to create one of the most enduring pop cultures of them all that still resonates to this day.

It may have been a retrospective term for a scene that was already thriving, but its back story goes back millennia. The book starts with the fall of Rome and ends with Instagram and Tik Tok influencers, taking diversions through Lord Byron, European folk tales, Indian sadhus, Gothic architecture, Romantic poets, philosophers and idealists before coalescing through the dark end of the Sixties’ youthquake, and then blooming like Baudelaire’s Les Fleurs Du Mal in the post-punk period.

Defying the broken heartland of the post-industrial cities, the semi-forgotten satellite towns and the grim real politic of the Thatcher years, this was a post-punk culture full of dark dance and a death disco. The music soundtracked the style and a Stygian obsidian soundtrack fused the many fragments of culture that had been flirted with in the post-war pop narrative; a darker culture that began to coalesce around the holy trinity of the Doors, the Velvets and the Stooges in the late Sixties before flirting with glam rock, being amplified by punk, exploding as Goth, and then splintering into electronic dance music, industrial, psychobilly and new Goth, before finally filtering through dystopian Hollywood blockbusters, modern literature and throughout the modern world.

In the late Seventies, Goth culture emerged around a clutch of bands who found a new form of beauty in the apocalyptic foreboding, as a new youth tribe took glam rock from the catwalk to the cobbles and onto their own dance floors, creating their own art of darkness.

The Art Of Darkness – A History Of Goth

Pre-order now to get a SIGNED copy of this definitive deep-dive into the dark side!