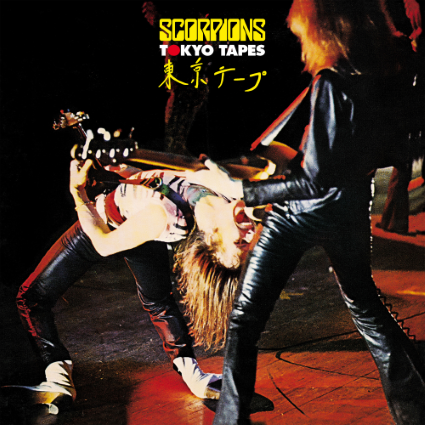 In the run up to their re-release next week, we will be bring you the lowdown on each of these Scorps classics, here’s part two.

Four months after the release of TAKEN BY FORCE, the Scorpions flew for the first time to Japan to give four concerts in the cities of Tokyo, Osaka and Nagoya. The group decided to record the shows in Tokyo’s Nakano Sun Plaza for a double live album as a parting gift for Uli Roth for whom it was his last tour with them.

TOKYO TAPES demonstrates everything the Scorpions have always stood for, regardless of their  line-up: high energy performances, brilliant musicianship, and intense communication and interaction with their audiences. When they recorded TOKYO TAPES, the band had reached their first peak; the classic formation with Uli Roth and the congenial Rudolf Schenker on the guitars was at its outrageous best. In their concerts they allowed themselves the freedom to change the songs at will. A good example for that was ‘Fly To The Rainbow’, the title song of their second album. The way they played it in Tokyo had little to do with the song familiar from the studio album. Instead of simply  replicating that version, they played around with it, introduced surprising changes and more than one element of improvisation. Uli Roth had fun with his effects, made the guitar roar, scream and sing beautifully, and the wicked solo on ‘Fly To The Rainbow’ is easily among the best he has ever produced.

TOKYO TAPES captures their energy and the fun they have on stage perfectly. It is simply one of the best live albums ever recorded. For those unfamiliar with the early years of the Scorpions, TOKYO TAPES also offers a fantastic opportunity to discover the great music they have written and performed long before they had become global superstars.

An extensive 16 page booklet rounds the package off. It features liner notes written by Edgar Klüsener, a former editor of Germany’s Metal Hammer and rare photos.