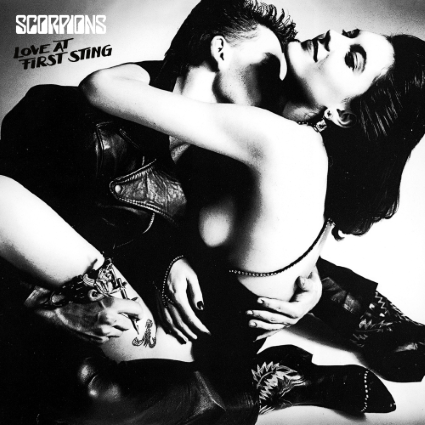 According to the unofficial third member of the MVM team, the seven year old son of our very own Don, there’s one on here that goes “Rock you like a Harry Kane. ” You might know it….

For the Scorpions, the early 1980s were a frenzied time. Their last three albums LOVEDRIVE, ANIMAL MAGNETISM and especially BLACKOUT had established them as one of the greatest rock bands of their time.

When it was time to lay down the follow up of the vastly successful BLACKOUT, the goal was simply to create an album that would surpass even its success. Again, the Scorpions did not play it safe but instead embarked on yet another song writing journey which covered a wide range of  different styles, degrees of aggressiveness and emotions. Most of all, though, they composed some outstanding ballads such as the bitter-sweet “Still Loving You”. While this song cemented their reputation as masters of beautiful ballads, it was only one aspect of a very diverse album which included other great highlights such as the ultimate live-hit “Rock You Like A Hurricane”. It is one of the songs which the band have performed most in their career, coming a close second to “The Zoo”. The third most performed song “Big City Nights”, yet another Scorpions classic, is also from LOVE AT FIRST STING.
When LOVE AT FIRST STING was finally released in February 1984, its global reception beat all expectations. In the USA  it peaked at No. 6 in the Billboard charts, and since its release it achieved triple platinum in the USA and double platinum in Canada.To celebrate their 50th band anniversary, the Scorpions are releasing a 2-CD/DVD Deluxe Edition of LOVE AT FIRST STING.

The high quality Digipack not only includes the newly remastered original album tracks, but also five exciting bonus tracks. The band themselves carefully selected the hitherto unreleased pieces, all recorded during the sessions for LOVE AT FIRST STING. Among them is a raw and powerful version of “Coming Home” as well as a very early demo of “Still Loving You”. The other three tracks are “Anytime (You Want It)”, “Living At Night” and the riveting “One Sting Jam”. CD 2 features the never before released recording of the band’s concert at New York’s legendary  Madison Square Garden in New York on 6th 1984.The bonus DVD comprises of videos of “Still Loving You”, “Rock You Like A Hurricane”, “Big City Nights” and “I’m Leaving You” as well as of footage from several TV-appearances. An exclusive interview in which the musicians talk about the recording of LOVE AT FIRST STING completes the DVD.
An extensive 16 page booklet rounds the package off. It features liner notes written by Edgar Klüsener, a former editor of Germany’s Metal Hammer, as well as rare photos and single covers, images of backstage passes and tour posters.
The LP comes in an original replica version with both CDs in paper sleeve incl. all bonus tracks.