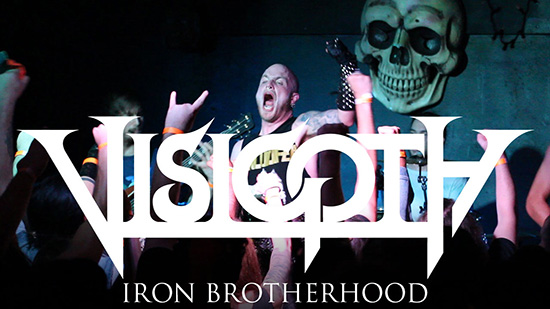 Last month, Salt Lake City’s VISIGOTH delivered a full set of no frills, no gimmicks heavy metal to eager fans in Ventura, CA at the “Frost and Fire Festival“. For anyone that missed this epic performance, the band has launched a live video of “Iron Brotherhood” from the show.

VISIGOTH comments: “‘Frost and Fire’ was an absolutely incredible experience for us as both a band and as heavy metal fans. We are deeply honoured to have shared the stage with so many phenomenal bands and to have met so many die-hard heavy metal enthusiasts who were in attendance from all over the world. Thank you so much for having us out your way, Ventura. We can’t wait to come back.”

VISIGOTH released their debut, ‘The Revenant King‘, earlier this year, giving fans and critics alike “real-deal old-school goods with power and swagger to spare” (Revolver Magazine). While they pay tribute to the titans of steel that left their mark on metal history, the quintet goes above and beyond mere imitation, making their own musical mark on the genre they lovingly embrace. AsNPR Music proclaims, “[Visigoth] looks to Manowar, Judas Priest and Manilla Road…for that classic ’80s sound, but the production is decidedly heavier, with mammoth choruses led by Jake Rogers’ regal voice.”