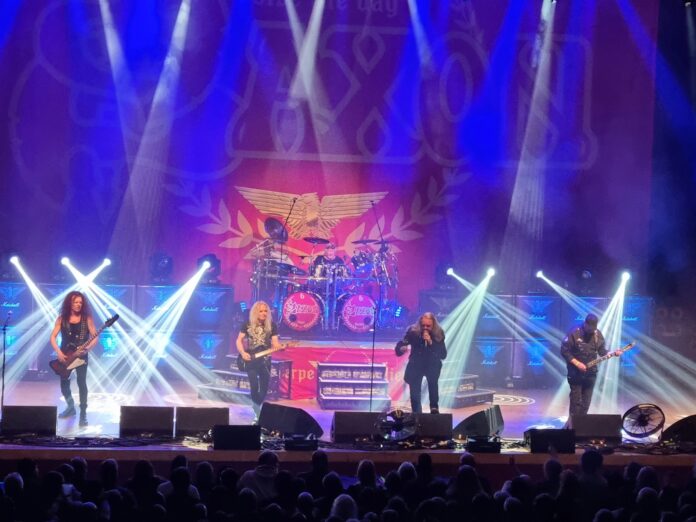 In some other world, Diamond Head would have their names on the top of the bill here tonight. Of all the NWOBHM bands (and we really must find a better name for it these days) they are the one that gets forgotten too quickly, yet listen to the quality of songs in their 40 minutes here and find the justice.

Whether it’s “The Prince” or “Lightning To The Nations” (which hadn’t been regularly played on this tour)  or any of the others, you know that you are listening to a wonderful band.

The reason for the change in the set (the closest the West Midlander’s get to home on this run) is perhaps explained by singer Rasmus Bom Andersen being a little under weather (“I sound like a pre-pubescent teenager” he explains. “Touring life!”), but whether he’s on full cylinders or not, he’s a mighty focal point.

“It’s Electric” is typical of DH in that its obviously “British Metal”, but its timings, its intricacies and its musicianship are all of its own, likewise “In The Heat Of The Night” sounds massive, and if “Helpless” sounds like tremendous fun (and by this point in the set, Andersen’s voice appears to be more relaxed) then the last one is the one you knew it was going to be.

Yet, there’s a reason that “Am I Evil?” has lasted so long, is so well regarded and covered so many times. When Brian Tatler plays the opening riff, it becomes as clear as the sea of devil horns that greet it: this song is actually the quintessential sound of “heavy metal”. Along with a few others, yes, but you could play it to anyone if you wanted to describe this music.

Which is why, whatever band of brothers Tatler and Karl Wilcox (the drummer for over 40 years himself) gather together, it’s the songs that make Diamond Head special.

Sometimes a band releases an album and you know they believe in it totally. Saxon’s from 2022, “Carpe Diem” was one such work. “Absolutely one of the best albums of their career.” I’d said in the review on these pages and not only has it become their “best selling album in many a moon” as Biff Byford puts it, but it also forms the backbone of this set too. Well it might, because right from the opening title track, these are six songs that deserve to be in the canon.

This is their first tour in a long time, and as they appear on stage at the start, the four – Byford, guitarists Doug Scarratt and Paul Quinn, together with bassist Nibbs Carter appear all together, as a close-knit gang. Too on the nose to say they are here to fight for metal? Maybe, but it does feel like that.

For the next two hours they are in wonderful form. If “Sacrifice” and “Age Of Steam” rather neatly underline that this isn’t a band who is wallowing in the past, then “Never Surrender” proves they are proud of their history too.

That seems to rather neatly encapsulate the vibe of the show all round, as it happens. Plenty of things to keep it fresh and plenty of celebrations of a career that goes back well over 40 years. And anthems. Loads of anthems. “I’ve Got To Rock (To Stay Alive)” (which featured Lemmy on the original) is one, but they are everywhere you look. “Dambusters” – another from the new album – will become one, “Dallas 1pm” has been one for years. Scarratt plays a wonderful solo here too and the skill of the band cannot and must not be overlooked.

“Heavy Metal Thunder” is chosen by the audience who want “a fast one” and when they are given a choice of “The Eagle Has Landed” or “Broken Heroes”, then the former is picked. It seems that kind of night.

“Black Is The Night” becomes a vehicle for Quinn (along with the singer, the only original in the group) to showcase his talents, before “And The Bands Played On” and a stunning “Wheels Of Steel” end the main body of the evening.

Except that’s not strictly true. It never is with Saxon. No one encores quite like them. And my goodness, the half hour that’s left is wonderful. “The Pilgrimage” (“you’ve made the pilgrimage to see us and we’ve made a pilgrimage to Leicester” offers Byford, the wording alone indicates how seriously he takes his craft) is a centrepiece, but “Solid Ball Of Rock” is special. Before it, people begin throwing battle jackets on stage (“this one doesn’t have Saxon on, we’ll shred it!”) and Byford and Scaratt both wear the extra clothes before signing them and throwing them back. It makes for a moment that is strangely perfect for the band. Group and crowd as one, fittingly “Denim And Leather” is played next and this music might well have brought us all together, it forms bonds that last decades and will still endure.

All those thoughts are still there as “Princess Of The Night” ends things, but there’s one overriding thing in the mind: Saxon despite the career they’ve had, are still perhaps a little underrated. Yet they remain one of the best three metal bands on these shores. One that is rightly proud of its past, yet not tied down to it, they are still seizing the day, each time they are onstage.