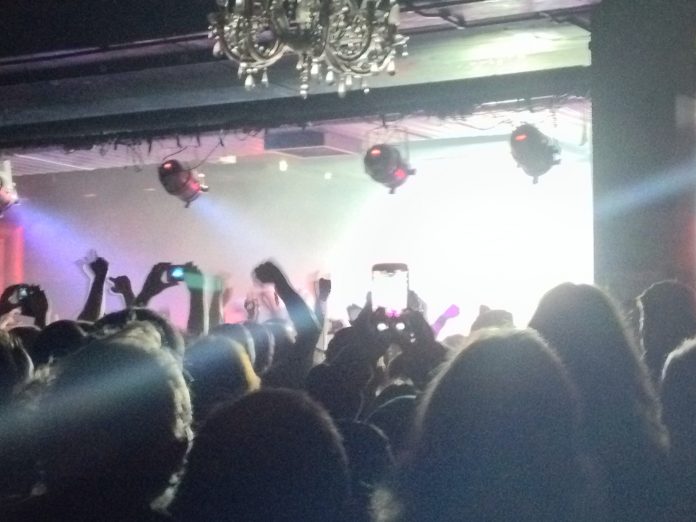 War obsessed Swedes do battle with the heat in Wolves

To say they are taking a step backwards may be harsh on Sabaton. And yet, around four years ago, when the band really began to break through with the “Coat Of Arms” record. MVM sat in this very room to watch a sold out show from them. Then on their last tour they upgraded to the bigger Wulfrun around the corner (everyone’s retro faves Rival Sons are there tonight), but to paraphrase Led Zep the crowd remained the same.

So now they are back where they were – and by the way the place is heaving again with rabid fans who know every word of every song. Maybe this is where they are truly at home, even if it is about a million degrees.

Battle begins – as always – with Europe’s “The Final Countdown” which is blasted out before the band take the stage. When they do it’s with the a rollicking “Ghost Division” before the place bounces to “To Hell And Back.”

That pair of tracks rather sets the tone, because they are the essence of what Joakim Broden – one of only two constants in the bands ever changing cast – has been trying to do since 1999. For 15 years whatever version of the band is involved they have sung glorious power metal songs about both war and the characters involved in those battles. They have done this along with brilliant, massive choruses as well as a keen eye on a classic sound and they are here to prove it.

There are plenty from the return to form that was 2014’s “Heroes” record, but this is a 80 minute set that spans their career. “40:1” is case of horns up and bombs away, with “Gott Mins Uns” rivaling it for sheer joyousness – especially after the crowd chooses to hear the song in Swedish, and tries to sing along….

Broden is quite brilliant frontman, his easy humour (witness his discussion on the differences between US and British English, which is very rude but very funny) totally at odds with the often grim subject matter here. He also evidently enjoys playing guitar (“you are going to be blown away my skills” he jokes before knocking out “Smoke On The Water”) which he does for “Resist And Bite.”

The audience chooses again and “Smoking Snakes” from the new record gets an airing. “The Art Of War” which follows remains perhaps their finest fists-in-the-air moment amongst money, but it’s slower more deliberate tones really crash home in this setting.

Sabaton mine their extensive back catalogue to huge affect, with “7734” in particular sounding mighty, while more recent material has an epic feel.

“White Death” (chosen by a guy on the front row) ends the main set, before the encore takes in an anthemic “Primo Victoria” amongst others, including “Swedish Pagans” which is sung because the audience demands it, before that wonderful hymn to their childhood metal favourites “Metal Crüe” sees the armistice declared for this particular war.

The biggest cult metal band in the UK? Maybe, but that doesn’t make Sabaton any less then stellar. In front of their own crowd, make no mistake, this metal army is all but unstoppable.