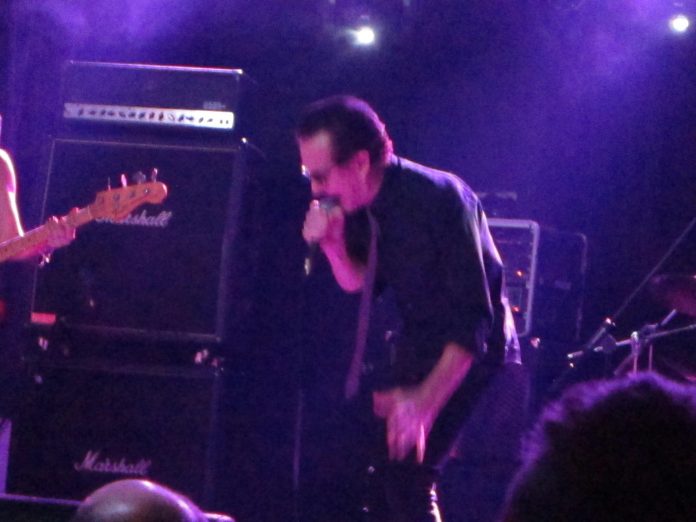 Arriving during Ronin’s second number “The Bearer,” it is immediately striking how impressive the energetic Worcester based four piece band are. They quickly followed up by an excellent cover of Fleetwood Mac’s “The Chain”.“Without You” from their first ep comes next with a snippet of Zeppelin’s “Whole Lotta Love” thrown in. The band are very tight, which you imagine is down to having come back from a short European soirée with local heroes Magnum. There is only time for a couple more, of which “Fly Away” is the pick.

Morpheus Rising, a five piece hard rock band from the beautiful city of York, are next up, hampered by having a stand in rhythm section tonight. They have been around a while, debut album “Let The Sleeper Awake’ was given free with Metal Hammer a couple if years back, but now they are on to record number two, “Eximus Humanus.” Looking For Life” and “Mega City One.” both are from the new record, while the anthemic “Lord of the North” gives an example of previous work. MR are reminiscent of Queensryche and Iron Maiden and that’s no bad thing.

So tonight’s show by the forever to be tagged as “former Rainbow frontman” Graham Bonnet is being sold as the Rainbow Classics tour so it should be no surprise when the majorityof tonight’s set is culled from the 1979 album Down to Earth.

“All Night Long” opens the show and Bonnet’s voice seems a little bit stretched which,he lets us know, is down to today being the last day of the tour and that he has a cold.

“Love’s No Friend” follows, then we are told that when Richie Blackmore approached him about joining Rainbow he thought they might be a folk band. Strange he says, as Richie is now essentially Robin Hood. More Rainbow in bre shape “Makin` Love” and “Bad Girl” follows before we are
introduced to a new song about the 1960`s and the Beatles called “Always Be There”. Which he follows up with a run through of the Beatles own “Eight days a week”

Beth-Ami Heavenstone on bass and Conrado Pesinato on guitar are the right sort of musicians to complement the singer’s voice. “The Witchwood” a track from his time with the band Alcatrazz.

Bizarrely, Bonnet leaves the stage for the drummer and guitarist to play a
song called “Seven Deadly Sins” after which we get a drum solo. The artist
returns and we get “Night Games” and “Since You Been Gone” to round off the evening.

A one song encore of “Lost in Hollywood” and they all depart the stage.A short but highly charged set. Perhaps not the best night the signer has ever had – if he didn’t have a cold, though, it may have been better.