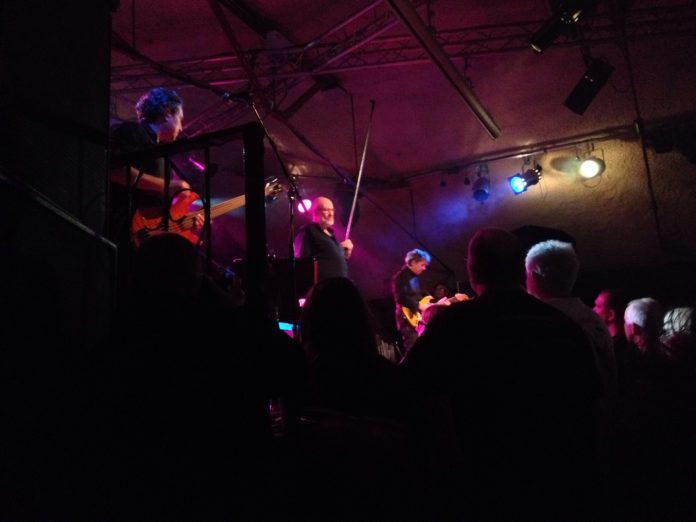 Was Fish’s rescheduled gig worth the wait? You bet!

“Sorry we are late,” says the man his mum knows as Derek Dick. “Axl Rose keeps you waiting about four hours, we do about six fucking months.”

Y’see, Fish should have played this gig in the Spring but illness to his guitarist scuppered that. The harvest of this is that many, many people have waited a long time for this. And our man was never going to let us down.

It seems almost twee to refer to Fish as a British institution, but what else can you call a man who for well over 30 years has been responsible for some of the finest music ever made? Not that he expects a pedestal. In fact given the way he involves his fans online, we can deduce if he wasn’t onstage, he’d probably be watching an act like him with us.

Last year this man of the people stuck out “Feast Of Consequences” – an absolutely brilliant piece of work from which the first two tracks come tonight. The title track is good, but “Perfume River” is worth the admission price alone.

There is no doubt about the centerpiece of the show, though. After an emotionally charged and clearly heartfelt dedication to the fallen of both sides, we are treated to the “High Wood” suite. This is the half an hour long collection of songs on “….Consequences” that deal with the First World War, including a quite marvellous “Crucifix Corner.” In short it is exactly the sort of ambitious, challenging and yet totally accessible music that Fish has always made. Moreover, if there’s been a better section at any gig this year then we haven’t seen it.

A driven individual still – his speech before “Vigil” is a real rabble rousing ‘fire and brimstone’ affair – he goes for a stroll through the audience during the song, with it’s “deadliest weapon is truth” line almost spat out such is the venom here.

“Heart Of Lothian” ends the set. Another Marillion song, “Incubus” is his first encore, before a gorgeous “Blind To The Beautiful” and “The Company” – and by this time it’s wine o’clock and there’s a questionable display of dancing to boot – end a wonderful two hours.

The years have been kind to Fish. Yeah, there’s less hair than on the “Kayleigh” video, yeah he’s a little chunkier (but christ so is the audience!) and there’s a lyric sheet (“I’m turning the page on the book of lies,” he jokes) but his voice and his songwriting ability are absolutely undiminished. As a live performer both funny and compelling, he has few equals. Tonight proved it.