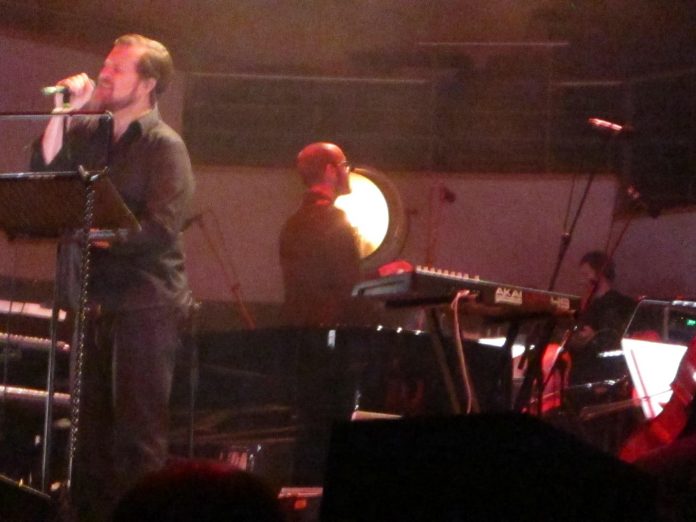 Damian gets out and about again. The rest of the MVM staff scratch their heads as to who John Grant is….

It’s seven thirty with the Sinfonia already seated, the lights dim and the band walk on stage followed by the man himself. Dressed in a dark suit, he launches into “You don’t have to”, followed by “Vietnam” before he seems to relax and removes his jacket.

“Geraldine” is played and it is explained that it is about the actress Geraldine Page. who played Eve in Woody Allen’s 1978 movie drama Interiors. It tells of what the author wanted to say but never got to meet her before she passed.

In amongst the classic older material is a new number called “No more Tangles” about Co-dependent relationships, another new track
“Black Blizzard” follows soon after

. “J C Hates Faggots” and my personal favourite “G M F” are aired before the song “Sigourney Weaver” dedicated to two friends called Dennis
& Lois, who were in the audience and had given the singer a present of a
little figure of her character in Alien.

An intense set is rounded off with another brand new song “Global Warming”. A Czars number “Drug”, before“Queen of Denmark” and “Glacier” ends things.

The encore comprises of three more numbers including “Fireflies” written for
John’s sister. A John Grant show is an emotional experience.
His songs at times are not an easy listen as they deal honestly about his previous addictions to alcohol, drugs and about his sexuality.

They can seem brutal but by the same token beautiful. He is a very charming, charismatic and humorous host. The addition of the
chamber orchestra on these shows broadens the range of these numbers. Having not attended a John Gant show before I have nothing to judge the format of these numbers against a more stripped down band version. So please Mr Grant hurry back.