Roll Out The Red Carpet 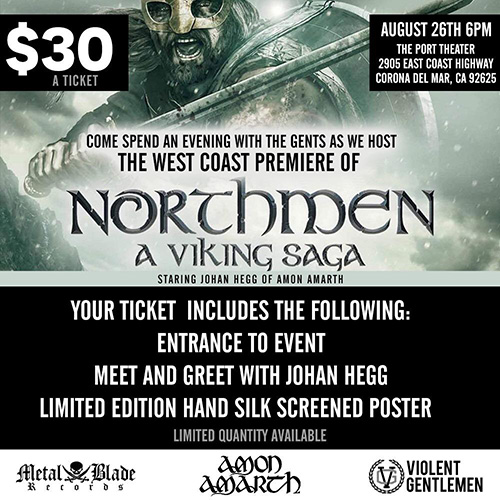 A very special screening of the saga

Metal Blade Records and Violent Gentleman are teaming up with Starz and Anchor Bay Entertainment to screen NORTHMEN – A VIKING SAGA on August 26th. The screening will take place at The Port Theater in Corona del Mar, CA at 6:00pm. Tickets are $30 and include: entrance to the event, a meet and greet with Amon Amarth vocalist Johan Hegg, plus a limited edition hand silk screened poster! The Port Theater is located at 2905 East Coast Highway, Corona del Mar, CA 92625. For more details, visit portnewport.com. For tickets to the screening, head to violentgentlemen.com.

NORTHMEN – A VIKING SAGA tells the story of a group of Vikings in the ninth century who sets sail for Britain, aiming to plunder the rich monasteries in the northern part of the island. But a storm smashes the ship to pieces on the rocks off the coast of Scotland, the only part of Britain without any Viking settlements. Soon thereafter, the daughter of the Scottish King falls into their hands and the Vikings see this as an opportunity to demand a large ransom. The King immediately sets his ‘wolfpack’ – a group of mercenaries well known for their savagery – on the Vikings. The “Northmen” with their hostage now have to force their way through the rough highlands, where they meet the brave and mysterious Christian monk Conall (Ryan Kwanten). Having the wolfpack close on their heels, a desperate race against time begins. A battle over life and death.