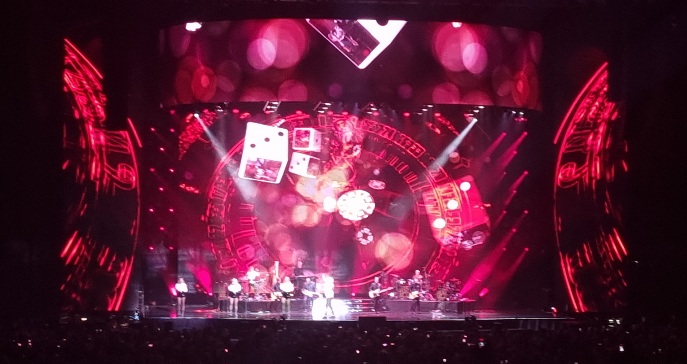 Call me Nostradamus, or something. But no sooner have I worked out that the person that Johnny Mac is reminding me of is Bruce Springsteen, then he and The Faithful play “Pay Me Money Down” as The Boss had done on The Seeger Sessions. Now, to be fair to JMATF, its only his stage craft, right down to the falling over at the end of “The Irish Rover” to be coaxed back to his feet by the band. Musically, they are a real melting pot. Americana if it was involved in a ceilidh down the Irish pub, a line dance down the punk club, all of that and more. Whatever it is, good grief, it’s fun and no one can possibly criticise the effort that gets put in. The set is not just the trad folk of the two songs I’ve mentioned so far, no, rather most of this is original stuff from their just released record “Midnight Glasgow Rodeo” (probably best not to ask what they were riding…..) The title track is excellent, as is “You Make My Monday Mornings Feel Like Saturday Night” and their “Me Oh My” single, which featured Rod Stewart on vocals, is a touch of class. JMATF are very evidently superb musicians, their version of “Galway Girl” – played early in their set – manages to bring something new out in that one, and the one at the end “Joey Ramone” is the type of stomping Americana that you can’t fail to warm to. Granted a wonderful opportunity at the start of their careers, maybe, but Johnny Mac And The Faithful have the skill to take advantage.

I am not on a guestlist tonight, I am not obligated to review this. I am – just like the other 10,000 or so in here – just a fan of the music. So, I am going to indulge myself with a story. In early 1990, I was seriously into a band called The Quireboys. I was boring my parents with this news. I was 14 I thought all music was new and never had been done before. My dad listened to about 15 seconds of the single I’d bought, and says “who’s doing the Rod Stewart impression? That’s just The Faces”.

Every Thursday in those days, dad and me used to go to the library. He’d get his books for the week, and I’d take my £2 a week pocket money to get some records out. That week, I borrowed “A Nod Is As Good As A Wink to A Blind Horse”. It’s got “Debris” on, but crucially it had “Stay With Me” too, and ok, fine my dad was right.

Fast forward 32 years and Rod Stewart finishes his set with it tonight, and you know what? It’s still one of the finest, purest rock n roll songs ever made.

To be fair to Sir Rod, he has a few of them and he merrily plays them for two hours here. It’d all started with Robert Palmer’s “Addicted To Love” and the sheer spectacle of it hits you. Hard. This is not just any concert. This is big, bold and brash.

The female musicians in his band recreate the famous video for the song, but when it all gets going, with a brilliant version of “You Wear It Well”, you begin to get a sense of just how big a career we are dealing with here.

“Ohh La La” (more Faces genius), “Some Guys Have All The Luck” (and you can’t help but raise a wry smile at Stewart playing it) and some soul covers like “Twistin’ The Night Away” (the audience does as its told), but whatever it is, this is done so well.

More costume changes than Kylie Minogue, maybe, but this is so well thought out. The band are from the top draw too, and their version of “First Cut Is The Deepest” is a real highlight. “Maggie May” is a singalong, and there’s moments of tenderness along the way, as with a cover of “I’d Rather Go Blind” being dedicated to Christine McVeigh, as Stewart had seen her play it in her Chickenshack days.

Another costume change, this time to yellow and blue for the Ukraine flag and the anti-war “Rhythm Of My Heart” before the ladies in the band get to stomp their way through Donna Summer’s “Hot Stuff” to allow Rod a breather, you imagine, as well as another costume change.

This is a slick show (albeit the curtain doesn’t work so there’s no encore) and its well planned and exquisitely paced, so the middle bit is acoustic, including an almost gospel take on “People Get Ready”, a fragile “I Don’t Wanna Talk About It”, which is one of a clutch to benefit from the sax of Jimmy Roberts, and a lovely “Have I Told You Lately”.

The third act, as it were, begins with the ladies again. “Lady Marmalade” is delivered with all the sass in the world, and as ludicrous as “Do Ya Think I’m Sexy” is, it’s hard to resist, likewise the disco of “Baby Jane”. “Sailing” (my dad went to school with the bloke who wrote it, fact fans) is big and clearly connects with most of the crowd, before the aforementioned “Stay With Me” should be the encore, but isn’t due to the tech difficulties.

Look at some of the songs I’ve mentioned here. There isn’t a person on the planet who doesn’t know a handful of them. And that, ladies and gents is how you get to be a megastar for decades. Snipe if you like, but this is a proper arena rock show. A spectacle that not many will get near.

“We want Rod” chants the crowd before the lights go up. They got the full length here. And he satisfied thousands.