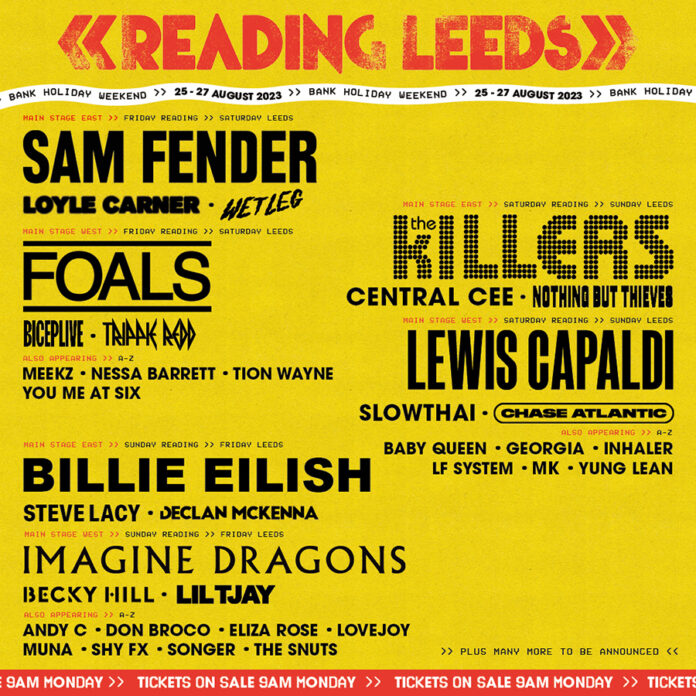 20-year-old Billie Eilish remains one of the most treasured singer-songwriters of her generation, continuing to shatter the ceiling of music with her genre-defying sound since the release of her debut single ‘ocean eyes’, breakout No.1 album ‘WHEN WE ALL FALL ASLEEP, WHERE DO WE GO?’ and latest album ‘Happier Than Ever’, released last summer to global critical acclaim and topping the charts in nineteen countries worldwide. With multiple accolades including seven Grammy awards, three BRIT Awards, a world tour that included Glastonbury and Coachella headline slots and six nights at the O2 Arena, Billie Eilish is also the youngest artist to write and record an official James Bond theme song, ‘No Time To Die’, which won an Academy Award this year. She is now set to become the youngest-ever solo artist to headline Reading & Leeds as another early-career triumph. Having drawn one of the biggest crowds the festival has ever seen at her appearance in 2019, Billiemania is ready to transcend to new heights as she owns the stage at Reading & Leeds in 2023.

If Sam Fender’s debut album, 2019’s ‘Hypersonic Missiles’, introduced a smart, street-wise British songwriter with a penchant for euphoric, hard-hitting guitar anthems, it was 2021’s peerless Seventeen Going Under that sent the Geordie artist stratospheric. Following his first appearance on the Reading & Leeds main stage in 2021, selling out Finsbury Park in 2022 and subsequently selling over 110,000 tickets for two hometown stadium shows in Newcastle next year, headlining Reading & Leeds is set to become another thrilling chapter of Sam’s coming-of-age story. Now, bearing a trove of well-deserved awards to his name (including BRITs, NMEs, Ivor Novellos, and a first Mercury Prize nomination), Sam Fender has almost inadvertently become one of Britain’s most celebrated and successful musicians of a generation.

Sam Fender says, “I first went to Leeds Festival with Dean when we were teenagers. We had a wild time, a rite of passage. Ten years later and we’re headlining. I’m so excited, it’s going to be fucking intergalactic! See you down the front.”

Foals are one of Britain’s biggest and most beloved bands, and Reading & Leeds are proud to welcome the Oxfordshire natives back as headliners for the first time since 2016. The chart-topping, BRIT Award winners recent album ‘Life Is Yours’ was purpose-written for a euphoric festival summer with joyous, dance-influenced tracks and a jubilant message. Their long-standing classics My Number, Mountain At My Gates and In Degrees feel timelessly at home on the radio waves and during the band’s electrifying live shows, and will undoubtedly delight Reading & Leeds fans when returning to the main stage.

Yannis Philippakis, Foals says: “We’re so hyped to be back at Reading & Leeds. We’ll never forget the rush of headlining Leeds in the absolute pouring rain in 2016, a show that was one of our most intense ever, or back in 2008 at Reading feeling possessed, climbing the rigging and launching myself headfirst into the crowd.

We’ve always had an amazing and feral time playing here, one of the greatest festivals in the world. It’s so special to be given a headline slot and we’re gonna rock it. Oh, and we might throw in a surprise or two.
See you in the pit.”

The Killers are a band that need little introduction, and Reading & Leeds is thrilled to be welcoming them back as headliners. Last seen dazzling the UK with a sold out stadium tour, the Las Vegas group return to Reading & Leeds following their acclaimed LP, ‘Pressure Machine’, and the recent single, boy. From their earliest hits and through their record-breaking seven consecutive Number 1 albums, the band spans true modern classics such as Mr Brightside, Somebody Told Me and All These Things That I’ve Done, via When You Were Young and Dustland Fairytale, Human, Runaways, to more recent favourites like The Man, Caution, Run For Cover and My Own Soul’s Warning. Their catalogue of anthems speaks for itself, and with a new studio album in the works, fans at Reading & Leeds will see a band at the height of their powers. The Killers’ grand return to Reading & Leeds 2023 will no doubt be met with a heroes’ welcome.

Ronnie Vannucci, The Killers says: “We have been hearing about Reading & Leeds since ever we can remember. Each time we return is a bigger mountain to climb. 2023 serves as no exception. See you at the top.”

Imagine Dragons have been tirelessly filling stadiums, crafting cloud-rattling anthems, and breaking records at every opportunity. Fronted by the effortlessly talented Dan Reynolds, the diamond-certified GRAMMY Award winning Las Vegas quartet occupy rarified air as one of the biggest bands in the world, now set to headline Reading & Leeds for the first time ever. Counting tens of millions of album sales and over 110 billion total streams, they stand out as the only band in history to earn four RIAA Diamond singles and a multitude of multi-platinum singles in Radioactive, Believer, Demons and Thunder. With the release of their first double-album opus Mercury – Acts 1 & 2 they’ve collaborated with everyone from Kendrick Lamar, Lil Wayne, Wiz Khalifa to Avicii and film composer Hans Zimmer.

Imagine Dragons are incredibly excited about headlining, saying : “You never forget your first time playing a legendary festival like Reading & Leeds – there’s an energy like nowhere else on the planet. It’s an honour to come back and headline after all these years, and we plan to make it something we all remember.”

Double BRIT Award winner and GRAMMY nominated Lewis Capaldi makes his Reading & Leeds headline debut  as one of the UK’s biggest music success stories. Top-selling album ‘Divinely Uninspired to a Hellish Extent’ broke the record for the most consecutive weeks in the chart for any solo artist, and still holds the record for the most-streamed week one debut. It’s been a recent whirlwind return for the Scot, rocketing straight to the top of the UK singles chart in September with comeback single Forget Me – his third UK number one. Known for his legendary performances and straight-talking on-stage humour, his appearance at Reading & Leeds is sure to tip him into a world of superstardom, bolstered by his unmatched songwriting capabilities and skyscraping ambition.

Lewis Capaldi remembers his last time at the sites saying: “I am so, so excited to be one of the headliners for Reading & Leeds Festival. Unreal that last time I played was to a wee crowd in 2018. Can’t wait to see you all next year.”

Melvin Benn, Managing Director of Festival Republic said: “We are delighted to return to Reading’s Richfield Avenue and Leeds’ Bramham Park in 2023 with another epic six headline artists, and an incredible, genre-defying line-up that features some of the very best in modern music. Once again Reading & Leeds is set to be the ultimate bank holiday festival weekend – we can’t wait to be back!”
JUST ANNOUNCED