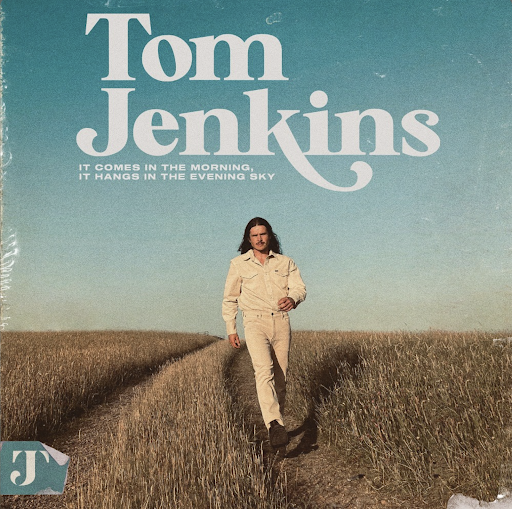 Singer-songwriter TOM JENKINS today releases his new album ‘It Comes In The Morning, It Hangs In The Evening Sky’, alongside its spectacular title-track.

Hitting the shelves today (25 November), ‘It Comes In The Morning, It Hangs In The Evening Sky‘ is the singer-songwriter’s follow-up to 2019 solo debut ‘Misery In Comfort‘.

Opening-up about the new record and how it came to be, Tom Jenkins says:

“”It Comes In The Morning, It Hangs In The Evening Sky”, was an album that I never intended to write, it just happened. It was something to do during a dark period in all our lives. I guess the album represents the feeling of dread and not being able to shake it, but also love and the appreciation of life and everything that comes with it. I like how the album jumps through the influences: it brings you up and drags you down. It was also amazing to have all my friends play on it and have a bunch of legendary musicians join in too.”

Recorded in the depths of lockdown, Tom started tracking the album in a disused barn on an old laptop with just one microphone and a 2010 version of GarageBand. Realising he was completely out of his depth, he turned to lifelong friend and producer Todd Campbell and the pair began to turn the collection of songs into a full-length album at his studio in South Wales. Drafting in the aforementioned special guests, many of whom were old bandmates and friends he’d met on the road over the years, the record soon fell into place.

Shifting up and down through the gears, from songs with full-band production to stripped-back live takes recorded with one mic in the barn, the album’s mood lifts and lowers as it cruises through twelve enchanting tracks. Featuring earlier BBC Radio Wales A-playlisted singles including feel-good indie-rock anthem “Under The Sun”, Britpop-country fusion “Be There For You” and rustic, rural-inspired “Back Roads“; the record also delves deeper into the leftfield, such as on the blistering psych-rock cut “Magic Mushroom Island” or the beautiful acoustic ballad “If I Can’t Love You“.

The album also features the sprawling and cinematic title-track, “It Comes In The Morning, It Hangs In The Evening Sky“, a song that unfolds like a great epic told in three parts. Available to hear today, it will be accompanied by an official video in the coming weeks. Of the track, Tom explains:

“”It Comes In The Morning, It Hangs In The Evening Sky” is probably the most epic track on the album, and had to really live up to the name. The song draws influences from the likes of Jeff Buckley, Daniel Johns of Silverchair and Big Thief. Lyrically, it focuses on the feeling of dread and how it creeps up on you.”

Picked as Huw Stephens’ ‘Artist of the Week’ last week, Tom has cited influences for the album in classic artists like Jeff Buckley, Bruce Springsteen and Silverchair, to more modern indie-folk frontrunners like Phoebe Bridgers, Big Thief and Band Of Horses; all of which can be felt across its assured 12 tracks.

Now taking the album on the road this Winter, catch Tom Jenkins performing songs from ‘It Comes In The Morning, It Hangs In The Evening Sky‘ on a UK tour with Skinny Lister throughout November/December. Full dates and details are as follows: