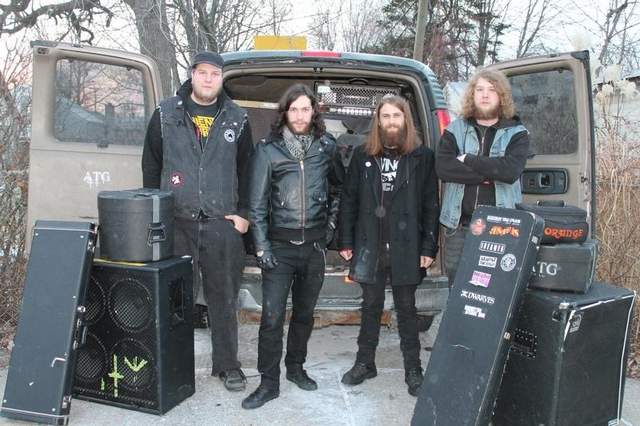 And you’d best believe it, Against The Grain’s record is out in September, plus they are touring with the mighty Mos Generator

Michigan is the birth state of some of the most honorable and heaviest hitting names in rock: MC5, The Stooges, Sonic Rendezvous Band, The Meatmen, Negative Approach and the list goes on. Against The Grain is the leader of the new breed of underground heavy music in MI and is carrying the torch of those that came before them with blue collar like – balls out fury and intensity that made names like John Brannon (Negative Approach), Fred “Sonic” Smith (MC5) and Tesco Vee (The Meatmen) revered for and with their work ethic, they have no signs of slowing down any time soon.

Since forming in 2009, they continue to tour across the US playing as many as 150 – 200+ shows per year (both solo and with touring national acts) and are releasing their upcoming record, properly called Road Warriors on September 15th through Self Destructo Records.

Road Warriors is the fourth album by Against The Grain in as many as three years and a big advancement for the Motor City Madmen, sonically speaking. Recorded at Train A’ Comin’ Studios in Mt. Clemens, MI by longtime engineer and fifth member, Bryan Griffin and mixed/mastered over in Portland, OR at Audiosiege by Joel Grind (Toxic Holocaust) and Brad Boatright (From Ashes Rise), respectively.

The partnership between all four parties here results in a crushing, balls bruising twelve track album that infuses the Motorhead-esque break neck speed attack with doom riffs and tempos all while adding in the elements of Blue Oyster Cult worthy twin guitar harmonies and southern boogie riffs that are exemplified by guitarist’s Nick Bellomo and Kyle Davis precision-like playing throughout. Songs like “Run For Your Life”, “Afraid Of Nothing” and “Till We Die” carry on their frantic speed rock/punk attack while “Sirens”, “Here To Stay” and “Pendulum” are standout tracks that truly showcase how each member has grown as a musician with examples shown through the rhythm section of the Nowak brothers with Chris Nowak’s vocal range capabilities and his ability to transition into different time measures effortlessly as led by battery man Rob Nowak.

Road Warriors is a testament to their growth and maturity in both the sonic landscape and overall as a unit.
The artwork and illustrative concept and design created by Los Angeles based graphic artist Casey Howard (Turbonegro, Mastodon, High On Fire, Zeke).

Road Warriors will be released on VERY LIMITED LP/CD on July 31st at Against The Grain’s record release show at Small’s (Hammtramck,MI) and will be available for retail stores on September 15th through Cobraside Distribution and online through Shop Self Destructo and Shop Turbojugend. Catch Against The Grain on tour nationwide in Fall 2015 with The Atomic Bitchwax and Mos Generator.