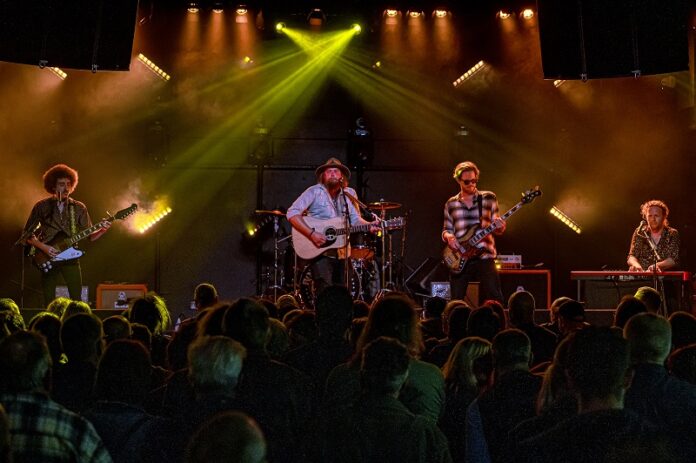 Time flies by, and I’ll be honest, it shocked me that it was 18 months since I reviewed Laura Evans EP. At the end of that piece, I wrote this: “Running Back To You” is what happens when a brilliant voice gets to work with some brilliant musicians – and it is a little gem.” The same is equally true of this show. Playing solo with just guitarist Joe Coombs (“I picked him up four days ago, I think I’ll keep him” laughs Evans) for company, the warmth of her voice and the joy at her ability to perform shines through here. Beginning with “Solo” (one of her earliest singles) before “Fire With Fire” makes it clear that here we have a talented woman who is pursuing her dreams. That’s why the cover of Chris Stapleton’s “Arkansas” works so well, given that it is just simply a song she evidently enjoys. Many of her songs appear to be from the heart, “Fool” deals with heartbreak and anger very neatly, for example, but one that isn’t is “State Of Mind” (“I watched a lot of Netflix in the lockdowns and wrote this about a girl who robbed a bank”), the common denominator, though, is class. “I’m Alright” – her current single – ends things in a rather more sassy way than the rest, but it’s a singalong too, and it works. With her new record out soon, it feels like this could be all systems go for Laura Evans, finally.

It doesn’t take long to notice it. In fact, it’s the second song, as it happens. Robert Jon And The Wreck are ripping through “Do You Remember” and Henry James – the band’s spectacular guitarist – joins Robert Jon Burissson centre stage, and they play a joint solo that recalls all of those greats from the US past that did exactly the same.

Right there, you know. You are watching the new kings of Southern rock.

That’s been obvious since the quite stunning “Last Wreck On The Highway” record, in honesty, because, being Californian, the thing is infused with some West Coast Sunlight to go with the dirt roads vibe too.

In many ways they’ve gone down the Blackberry Smoke route, if you will, that is to say they are the longest running, hardest working, overnight sensation there is.

Their extensive back catalogue means they can craft a set with the best of them, “She’s A Fighter” and “Do You Remember” from the last, brilliant “Shine A Light On Me Brother” record are typical of them and typical of what they do. Simply, they just rock. It looks like they were born to do it, frankly. Whatever Robert Jon put on his passport as his occupation in the past, rock musician is the only one that fitted. Denim clad, and with a real magnetism, he doesn’t say much (he’s got a throat issue and is saving his voice) but he doesn’t need to. The music does the talking.

The older material they do – perhaps the best example is “Hey, Hey Mama” – sees new life breathed into it by James’ wonderful solo, and in many ways, with ten years of work behind them, they switched gear when he arrived in 2018. Likewise, with their usual keyboard player Steve Maggiora on Toto duties, they’ve got the genius that is Bob Fridzema on organ. He excels on “Work It Out” and “Death Of Me” which is later in the set.

For all that this band has brilliant songs, “Oh Miss Carolina” being just about the best in years, the musicianship is right from the top draw. There’s some incredible slide guitar on “Desert Sun”.

That all being said RJATW are just a brilliant rock n roll band, “Everyday” celebrates being together again, and there’s a communal thing about the group. New tune, “Waiting For Your Man” is rip-roaring fun, something that ZZ Top would love, “Old Friend” is the only real acerbic tune they have, but even that one is wrapped up in a chorus you couldn’t resist.

They end with another older one, “Cold Night” and there’s no encore – perhaps the band just don’t need to be rock stars after all. So good is it that you are left wondering whether maybe this band has always been this good, or maybe its finally realised it’s sheer quality. Whichever it is, there are few outfits that have infused the classic sound with a brand new freshness like Robert Jon And The Wreck, and they belong on the road.