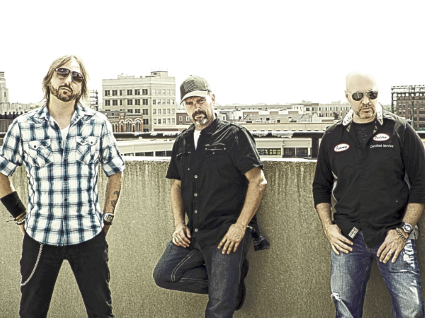 Our friends Devilstrip are finally getting s UK release next January

Devilstrip are a hard-rock power trio from the rust-belt of Akron, Ohio, USA. Comprised of Marc Wasmund (lead vocals/guitar), Graig Lindgren (bass/vocals), and Jimmy Gray (drums/vocals), the three piece tug from the inspirational powers of Black Stone Cherry, Live, and Foo Fighters, with critics already describing the band as “melodic, raw stadium rock with a bit of punk rock sensibility”. Stocked with hefty riffs, soaring melodies, and an explosive debut album in the shape of ‘Rise’, which drops on Friday 22nd January, the band are destined to break in 2016.

Born December 2012, the three piece had a strong desire to create something original, yet accessible, and instantly set to work, soon penning their debut single ‘Go’. Intense rehearsals and extensive writing followed, along with a gigging schedule which has seen the DIY rocksters grace stages with everyone from Europe, Buckcherry, Jared Weeks, Girl on Fire and Saving Abel, to the L.A. Guns. The band have also recently filmed an episode of the hit TV show “Bar Rescue”, which will air on Channel 5 later this year.

With the trio’s blossoming live reputation, Devilstrip decided to turn their attention to crafting their debut album ‘Rise’. Independently mixed and produced, the record is a call to arms for anyone and everyone that has an affinity with burly riffs and earnest songwriting. The layered depth of their debut album is evident as hammering drums and probing guitars, entwined with alluring hooks, cleverly wind their way deep into your core. Tracks such as the mighty ‘Go’ and the emotive ‘She Said’ are sure to light up radio airwaves. Devilstrip will tour the UK in the Spring, so latch onto the band now before they explode in 2016.

www.devilstriprocks.com  https://www.facebook.com/Devilstripband  https://twitter.com/DevilstripRocks
Previous article
Hey Joe, Where You Going With A Free Ticket In Your Hand?
Next article
Plenty Of Enchant-ment