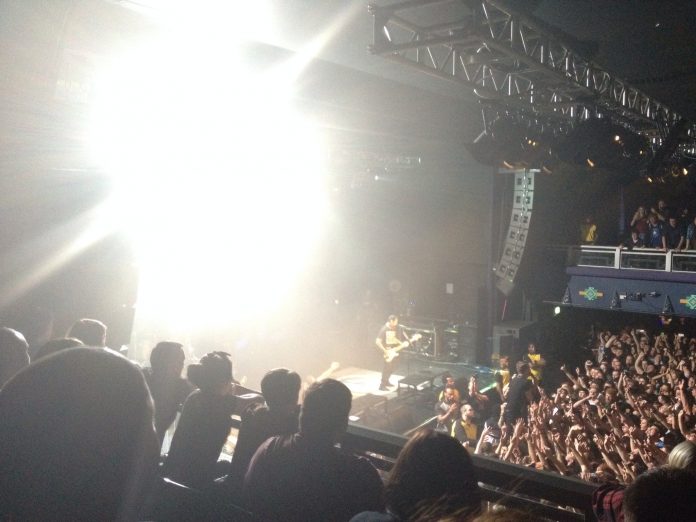 Emily’s Army were the originally billed support tonight, but they’ve been replaced by The Swimmers. Except they haven’t, rather they’ve just had a name alteration. With that cleared up it’s left to the Becker brothers and their friends to have fun for 20 minutes. These words are carefully chosen as apparently Swimmers/EA don’t have fans, they have “friends” and their music is “Super Music Friend Time.” If that doesn’t you we are a world away from sneering punk nothing will. Quite honestly Emily’s Army are a pleasant, smiling way to spend a while. That they have Billie Joe Armstrong’s son on drums is a big clue as to how they got here, their shimmering, almost Beach Boys take on punk is why they’ll stay. Whatever they are called.

Maybe it’s because they are older, maybe it’s because they’ve been around the block a few times, but Pennywise are a different proposition entirely. “I’ve got some bad B.O tonight” offers up singer Jim Lindberg helpfully, “I think it’s a bad chicken curry.” In Birmingham? Surely not. Maybe he needs to use the facilities urgently, because they race through a set that starts with their eponymous song and barely pauses for breath. “My Own Country” passes in a blur and they appear to ready to supply a boot to the jaw of anyone that isn’t enjoying themselves. If the first band were punk at at it’s cuddliest then Pennywise are the type of outfit that may administer a kicking out the back. A moshpit breaks out and “The World” is brutal. “Time To Burn” is dedicated by guitarist Fletcher Dragge to the legalisation of marijuana, while “Same Old Story” is for the skaters amongst the audience. They also find the time to cover Bad Religion (with whom it must be said they do share a sonic similarity) and “Do What You Want” is invigorated. And when you call a song “Fuck Authority” it’s meant to sound like Pennywise. The touching “Bro Hymn” connects on a more emotional level. Proof that punk can still mean something even in 2014.

Rise Against have kept it real for 15 years. That’s the opinion, anyway, of Pennywise. Their guitarist Fletcher was unequivocal on the subject during his bands set. The dedication to the punk rock cause has paid off, judging by the huge crowd in here tonight.

This tour is nominally in support of the Chicago bands first album in three years, the brilliant “The Black Market” record, not that they bother themselves by playing too much of it (with just a trio of new songs aired) but frankly such is the adulation that the crowd treats them with that Tim McIlrath and his mates could have sung a One Direction medley and got away with it.

The neon signs flash behind them as “Ready To Fall” kicks things off. There is then a charged up “Give It All” and the die is cast, pretty much, for the rest of the evening. This is muscular music, enthusiastically and superbly delivered to a euphoric gathering, one who have been waiting for this for a long, long time it seems.

A career spanning set, and one which shows the subtleties in RA’s output, new song “Tragedy + Time” echoes the Gaslight Anthem, but then leaves them trailing in it’s slipstream as they rattle along at breakneck speed, while “The Good Left Undone” packs a staggering amount of energy into one glorious package.

And actually, this is the type of gig where whether you like it or not, and whether you want to be or not you are swept up in it’s explosion. The rather inaccurately named new one “I Don’t Want To Be Anymore” slams, and is evidently already a fan favourite. “Chamber The Cartridge” takes things to another level and sees thousands of fists raised in the air in unison. That, though, pales into insignificance in the face of the chaos that “Prayer Of The Refugee” engenders. After a soaring “Satellite” ends the set, they are back for a tender acoustic pair in “People Live Here” and “Swing Life Away.” But they were always going to end with rock n roll, so “Make It Stop” and “Saviour” finally bring things to a halt.

Keeping it real? Certainly the band seems humble in the face of what essentially amounts to hero worship. Not only does the McIllrath describe being on this tour as a “punk rock kid’s dream,” more tellingly he adds: “We know there are a lot of shows that come to Birmingham, thank you for making it to this one.” And that’s kinda the point. For a lot of people this was an evening that they couldn’t and wouldn’t miss that could present issues for some bands. Rise Against rose to that challenge with ease.