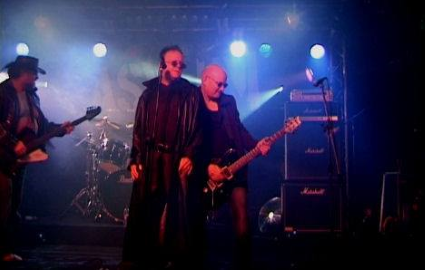 Formed in the year of MVM’s Andy and Donnie’s birth, these boys are forty this year too

The New Single “Wake Up” from Legendary NWOBHM Artists RICOCHET is here!
Ricochet originally formed in 1975 in the home of heavy metal, Birmingham are responsible for the 1980 hit “Midas Light” which has been often referred to as the holy grail of heavy metal singles. With the original single still selling well on Ebay and commanding figures as high as a $1000.00 a copy.

“Wake Up”  the new single is inspired by a movie script written by The Finn (Neil O’Neil) which won the best Epic Screenplay award at the Monaco International Film Festival in 2014.

Hard at work in the studio currently Ricochet still comprised of the orginal band line up have 5 tracks laid down and are due to release a new album at the end of 2015.

Wake up is a rich tapestry of superb musicianship, soaring riffs, stunning vocals and a track that must be listened to.

The single goes on sale April 6th 2015, with pre-orders commencing on the 23rd March. All pre-orders will be sent a special limited edition DVD.