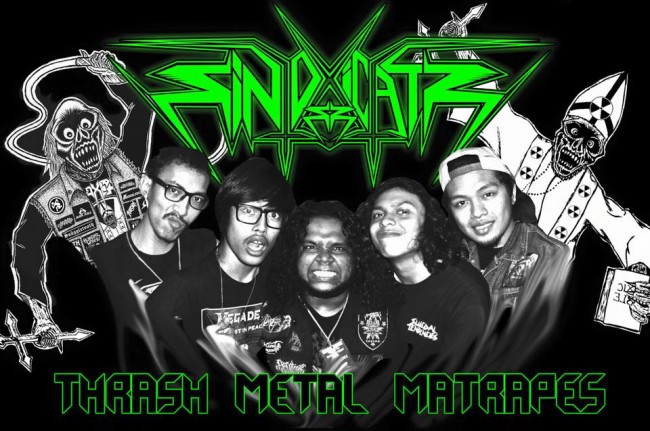 When you get an album from Siddique HeadKrasher, you kind of have to answer, right?

That’s what happened the other day, but Mr. HeadKrasher was a very nice chap, who had this to say: “We are a Thrash Metal/Crossover band from Singapore called SINTOXICATE. Formed in March 2013, we had just finished recording our [EP] ‘Toxic Pastor of Sin’ in November 2013 & it was released successfully & it was also well received by our friends in Singapore & Malaysia with 100pcs sold even before its launching date. We had to re-press more copies & that too was swept clean in 1 week.”

“Our main influences are a mix of early Tankard, Municipal Waste & Megadeth. Lyrical themes are mostly based on the bullshit that is happening in Singapore, horror & sci-fi. We emphasise more to our local taste than to follow the normal “Western Thrash Theme” (e.g. War, toxic annihilation, politics, bashing posers etc.) which many of our friends feel its different, unique & something they can relate to.”

Now they are ready to take it up a notch, with Siddique explaining: “We are currently looking for a record label to work with & to also help us out. Because now we are basically doing everything in a DIY way & there are some things which we are not sure of.”