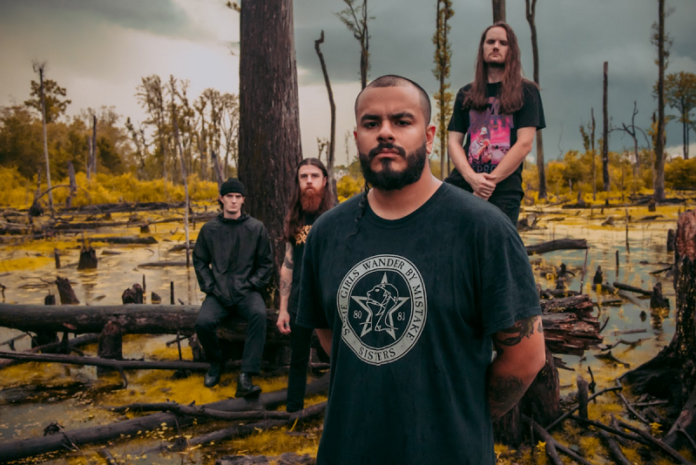 Floridian thrash crossover outfit, Rhythm of Fear, have announced their new album Fatal Horizons, due for release on 14th October 2022 via their new label home MNRK Music Group. The band have also revealed a video for their new single ‘Tears of Ecstasy’.

Check out the video for ‘Tears of Ecstasy’, premiered by Decibel, here: https://youtu.be/XhINqo5KW2w

With the record’s first single, the aptly titled ‘Tears of Ecstasy’, Rhythm of Fear inject a new stream of life into Clive Barker’s loosely based Hellrasier, and holds nothing back while racing forward in a full-frontal assault.

“When writing the music for ‘Tears of Ecstasy’, we felt we had a song that took us in a new direction. We were careful not to force anything but allowed ourselves to naturally flow into the overall vibe. When we felt the structure was ready for lyrics we took inspiration from Hellrasier. We summoned the spirit of the Hell Priest himself whilst channeling out inner Cenobites to put together some words of violence, aggression, and seduction. It’s a little homage to a favourite film of ours while asking the age-old question: ‘are you willing to die for pleasure?’ Are you?”

Alien abduction, magic rituals, and the occult pepper their songs with personality and spirit. Fatal Horizons delves deeper into the human psyche with relatable themes of depression, addiction, and anger. The justice system and politics are targets within the framework of broader fictional metaphors.

Rhythm of Fear worship at the alter of thrash metal and crossover. Summoned from the sadistic swamps of Jacksonville, in Florida’s heavy-metal rich soil, the masters of gargantuan groove conjured a reverence unrivalled by their peers. Committed to the unrelenting riffage, Rhythm of Fear gleefully reinvigorates the timeless collision of speed, musicianship, and attitude.

Unapologetic bangers like ‘Dark Energy’ and ‘Ten Theories’ quickly became underground classics to a growing legion of like-minded supporters who snapped up the band’s 2011 demo, The Mass Illusion EP (2015), and full-length debut Maze of Confusion (2016). The appetite for devastation only intensified with the Ritual Dementia EP (2019), featuring ‘Vortex of Torment’ and the impassioned ‘Over And Out’; a deep cut from the early power metal years of Pantera.

Now, the band threatens to conquer the hearts and minds of all in metal, with the vitriolic, thrashtastic, cirle-pit-inciting Fatal Horizons, their sophomore slab of cleverly crafted crossover. Produced, engineered, and mixed by Joey Jones (Royal Thunder, Cloak), with sci-fi/horror artwork from Mario Lopez (Toxik, Skeletal Remains, EvilInvaders), Fatal Horizons‘ thirteen-tracks are richly thematic and devilishly accessible in equal measure.

Rather than simply rehash the past, Rhythm of Fear absorb and examine metal history’s greatest strengths, reassembling the parts into a fresh Frankenstein forged by the band’s unique identity and experience. This is straight forward and in your face.