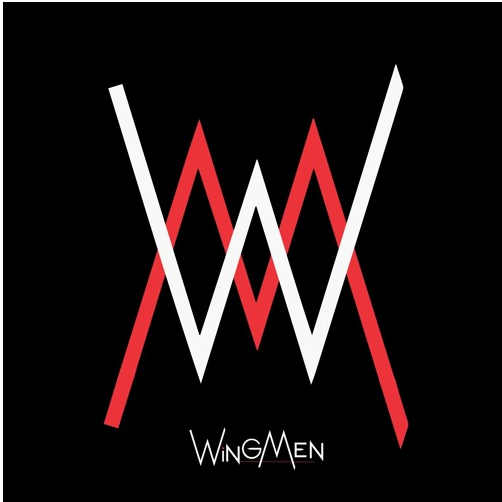 As someone pointed out, the only ironic thing about Alanis Morrisette’s “Ironic” was that there was no irony in it at all.

I hadn’t thought about Alanis for about 20 years, in fairness, but that popped into my head when the strains of “Happy Days Are Here Again” accompany the end of “It’s Raining All Over England”, as “Wingmen” comes to an end.

You only have to put the news on for 30 seconds a day to feel a burning, seething hatred for pretty much everything that’s going on, coupled with a despair that “they” planned it. That capitalism did its job and kept us in our place, or that, as my grandad used to say “money doesn’t talk son, it shouts. Really loudly.”

In fact, “Wingmen” the album, sounds as bleak as it deserves too, but it’s wonderfully and brilliantly done, because Wingmen, the band, are as close to royalty as you’re going to get.

The music is more interesting than the back story, but potted, it goes like this:  The country had gone into lockdown (I’ve got views on that, ask me later) and Johnny Moped’s drummer Marty Love rings The Damned’s Paul Gray and asks him if he fancies doing something (they’d worked on an album previously). They enlist Leigh Heggarty of Ruts DC and when they are looking for singers, settle on Baz Warne of The Stranglers, and they decide to write a record that reflects, in their words: “the dark period of 2020 and 2021” (in MV’s words, its not a lot better now….).

There, we are all up to speed.

The only thing that matters really though is this: “Wingmen” is brilliant. It doesn’t matter who’s in the band, this thing is incredible.

“Starting Blocks” kicks us off. Out as confidently as Usain Bolt at a school sports day, it’s the little intro, a bit of foreplay if you will, before we get down to it.

And my, when we do get going, the slide guitar drenched “Last Cigarette” is your proof. Rock n roll, played by masters. Organ’s, hooks, slide guitar, its all here “taking chances till we die” offers Warne here, and that surely is what binds these songs and this band together.

“Louis Smoked The Bible” is a testimony to Heggerty’s skill. Strutting, almost pop music – given the personnel, I probably shouldn’t say it reminded me of the recent Hugh Cornwell record, but it does, the choruses, though, are much catchier and it sounds like everyone had fun making this, even though they were all apart.

Gray’s bass is the building block for the acerbic takedown of serial complainers “Brits”, has the wonderful couplet: “you complain when its pudding, you complain when its pie” and if you think that’s spot on, then I give you one of the shining jewels in this crown. “I Would If I Could” is almost funky, but the vicious takedown of Tory destruction of the NHS is as acerbic (and true) as can be.

“Down In A Hole” has the air of The Stranglers, and has an unsettling feel, and the spoken word, “Mary Go Round” is almost a Warne recital. Like some dark, twisted poetry, an unwritten short story, maybe, whatever, it is a left turn.

The best of the lot, though is “Oh! What A Carry On”, a forensic takedown of the far right that has infiltrated the UK in the wake of Brexit, a “pyrrhic victory for the Union Jack, but at least we got our country back”. The subtext of “enjoy your blue passport, Farage” is never said, but it is unmistakably implied.

“Backstage At The Opera” continues in the same vein, only this time social media “experts” are in the crosshairs, the “me, me, me” culture and Warne’s rant against “selfish northern smartarse bastards” at the end is genuinely fantastic.

Which brings us back to where we came in. Sort of, because the aforementioned “…..England” is a lament to the unfair distribution of everything. Level up? Yeah sound. Course, Tories love fairness, don’t they?

“Wingmen”, reckons Gray, probably wouldn’t have come out if it were not for the lockdowns. I was going to write something trite and say: “finally something good out of that, then”, but the truth is the record is too good and what it has to say, too important, too erudite and too right for that.

A good squad doesn’t always get great results. Here, they might as well start the open top bus ride, because Wingmen have won.

Previous article
GONE TO L.A
Next article
BAND OF THE DAY: APE SHIFTER