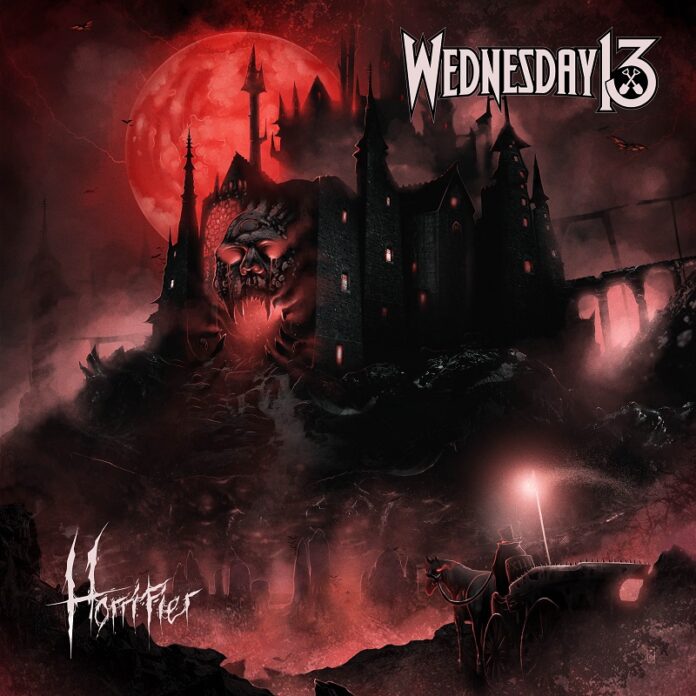 This is the bit where I make my declaration.

I’ve never seen a horror film in my life [insert shit joke about watching the same crap football every Saturday for 40 years here]. My mate and me got “The Lost Boys” out of the video library across his road because we liked the theme song when we were about 14 (Inxs and Jimmy Barnes, it’s a banger) and I had to get him to turn it off. I am squeamish, I am scared of everything, and just generally, no thanks.

So, when the supporting documents for a record (as they often do with Wednesday 13 albums) say this: “As always, various tracks on the album are inspired by classic horror flicks, this time circling cult-favourite slasher John Carpenter’s Halloween and the iconic Christine supernatural thrillers.” I have no idea.

Whatever, I do like rock n roll, and I like W13’s albums. I have done since he turned up on The Murderdolls (RIP Joey) back in the early part of this millennium, and “Horrifier” is a very good summation of what makes him/the band so good and so enduring.

The ten proper tracks on this (there’s a bit of an intro where you can more or less hear the credits roll) sort of cherry pick from the rest of their canon, so in a way make it something of a best of album.

One thing you can’t fail to notice, though, is that this is much heavier than your normal W13 album, in places. There’s a screeching, industrial harshness to “Insides Out” for example that makes this sound more menacing than the usual knockabout clowning.

“Exhume and Devour” has chopping guitar, to go with the thought that “I am a necromaniac, I feast upon the dead” as if to underline the darkness, a thing that “You’re So Hideous” carries on very neatly too.

“Good Day To Be A Bad Guy” (the current single) is more like the normal W13. Potty-mouthed, catchy, fun, tongue in cheek, and if this album has a centrepiece then its “Return to Haddonfield” and its touch of extra-pompousness.

The title cut of the album is as raw as it is unhinged. “The world’s one giant mortuary/Full moon arise tonight above the cemetery” sings the man christened as Joseph Michael Poole, and its got a real metal edge. “Hell is Coming” is violent and even for this album it is graphic, but it’s got more of a thrash tinge. It’s inescapable.

“Halfway To The Grave” lightens the mood a touch. That is to say that it has a more glam rock sheen, not a comment on the lyrical content. “Christine: Fury In The Night” I assume is one of the film ones. It thunders too, and there’s a bit of an overblown, almost Power Metal flavour.

The suggestion that somewhere in this is always something cinematic is played out on “The Other Side” which feels like the ending sequence, but if it does play out the credits, then it does so on a record that although rooted in the past, expands things a touch.

As ever, Wednesday 13 are in the sweet spot between Marylin Manson, WASP and Coop, its just this time, they are all playing NWOBHM tunes on an old Casio cassette recorder. And if when you go and see Alice, he always gets his just desserts, there’s a suggestion that Wednesday 13 gets away scott free time and again. That spirit is all over “Horrifier”.