REVIEW: Virgil And The Accelerators – Army Of Three 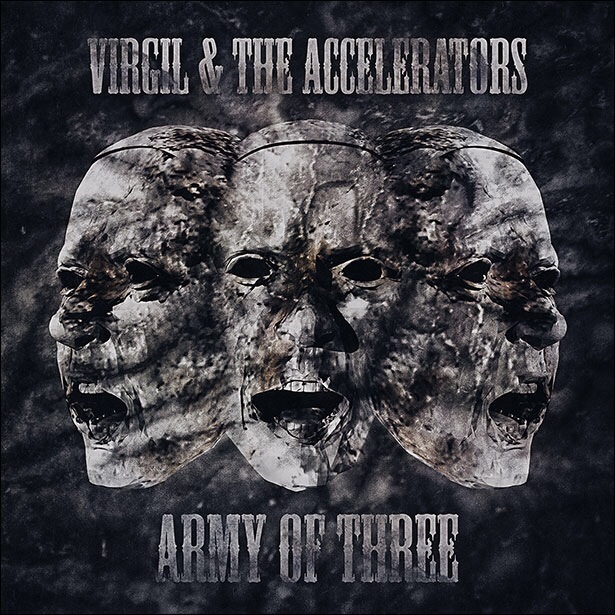 What is it about Blues that makes stars of the so very young? Joe Bonamassa has seemingly released about 50 albums and he’s not yet 40, Ryan McGarvey has won umpteen awards in Canada and he is still in his mid twenties, while over here we have our own crop. Oli Brown for example, and The Mentulls to name just two, are putting out great records before they can shave it seems.

In the UK though, they all have to catch up with Virgil And The Accelerators. The phrase “hotly tipped” doesn’t even come close to the raptures these boys have had critics in since they stuck out debut record “The Radium” three years back. A Classic Rock album of the year, it was followed up in 2013 by Virgil McMahon (his brother Gabriel on drums, and Jack Alexander Timmins on bass complete the trio) winning guitarist of the year at the European Blues Awards.

It’s with quite a weight of expectation then, that the guys are ready with album number two. Originally supposed to be out in May, it was held up when Producer Chris Tsangarides (Thin Lizzy, Black Crowes) became ill.

Given this, and the rather lengthy delay between albums one and two, you can perhaps forgive an element of confusion and “….Three” begins with the line: “I’ve been wandering around lost in a haze, for weeks and for months of never ending hours and days.”

The track that follows “Take Me Higher” however shows that sentiment to be just lyrical license, because it is a strident, confident statement, and one of a band that is mature far beyond their years.

VATA have stated that on this record they wanted production values and growth, and boy have they got them. “Blow To Head” takes the blues troubadour as a travelling force story and gives it a huge riff, while “All Night Long” which is the first video from the record, adds a real dirty boogie feel, but in an apparent nod to their youth the band are “in over their head” as the heroine of the song has her way with them.

The playing here is incredible – and anyone who has seen VATA live knows this is no fluke – but the songs are what counts, “Love Aggression” for example seems tailor made for US radio airplay and you can imagine it being played on great long trips to the horizon. “Through The Night” is an epic, slow burner and “Free” might be a simple tale of boy-falls-in-love-with-girl-who-doesn’t-love-him-back, but here, as the bookend of the album it is so much more than that, it’s laid back bluesy class would be worthy of Clapton, it is quite superb.

You hesitate to wonder how good this young band from Worcester, England could be. Two albums in you also don’t want to say that this is their defining moment, but it feels like they are getting there. It is certainly the sound of a trio finding their feet in quite stunning fashion.

Whilst there is no need for anyone to surrender as there is so much good blues about right now, this particular Army Of Three seems to be inexorably to be on the march.