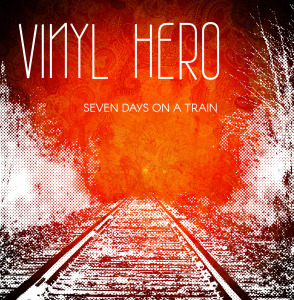 Seven Days on a Train is the latest release from Montreal Quebec alternative rockers ‘Vinyl Hero’. A five track EP influenced by Queens of the Stone Age and Stone Temple Pilots. Two big bands to be swayed by, so no pressure at all then.
After many years of being around the scene with various bands and settling on a members who can fully commit to what they are doing shows that Seven Days on a Train is a great ticket for this journey.
First single ‘Keith Richards’ a track about the man, the legend, the guitarist of Rolling Stones is the first song on the EP and the first song sent to the airwaves. Just like its namesake the song is full on bluesy guitar riffs with a superb introduction to some strong rock vocals.
Next is ‘Green Ambitions’, the right track to follow ‘Keith Richards as it’s the same format and that is more deep and dirty blues. ‘Playing God’ reminds me of early Crash Test Dummies, there is a superb funk feel to this song and deep connotations within their vocals, which I suggest you listen. ‘’cos the cross you hang around your neck is still heavier than a gun.’ ‘Playing God’ is my stand out tune of the EP it has well written lyrics, heavy blues guitar riffs and
There’s swagger in ‘Count My Blessings’ a catchy track in the mould of Nickleback. The flow leads perfectly on to the final track of this EP, Real TV. An operatic guitar riff kicks off this track, then crunches in to good old heavy rock, that blends with a Creed style mood, but without the white vest punching the air while standing on a rock.
You have until May the 6thto prepare yourself for this release, so start searching for them on YouTube, Facebook and Twitter to get your taste of Vinyl Hero.
Previous article
Featured Band: Jake Green Band
Next article
Four Minutes For Midnight