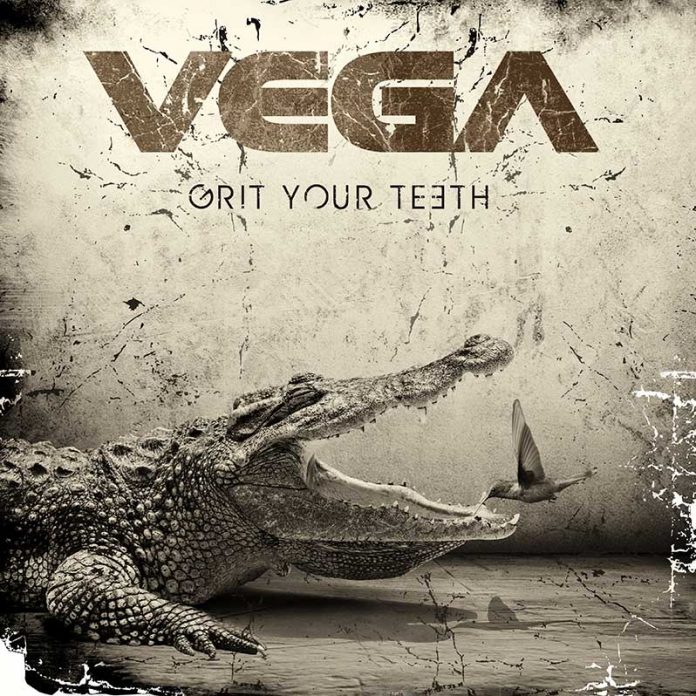 I know, from bitter experience, that you get out what you put in, generally – my exam results stand as proof –  but sometimes you hear a band and think: they deserve better.

To wit: 16th March 2013 – that is SEVEN years ago – I wrote this: “this is a hometown show for the singer, and one to be enjoyed immensely”

On the 26th January 2019, I wrote this: As a warm-up there would be few better. Destined to be higher up bills in the future, [they] are doing it the right way.”

The band on both occasions were Vega. And lets say this from the off (normal reviews save this for the conclusion, but I am a maverick) “Grit Your Teeth” is the record that is going to see them break out of the shadows.

Right. We’ve got that sorted, so now I’ll tell the story as to why.

The second one of those reviews was done in Bristol when Nick Workman – the “singer” I mentioned in the first review – and his troops were opening for Skid Row. That evening (an apt term) they were on stage at 5.30pm. It wasn’t a festival. It wasn’t fair.

The title track here, has the chorus: “I’ve got you fired up, I’ve got you riled up” and part of me hopes it was written backstage that night.

I once spoke to Workman, and he told me that “you could never have too many ‘woah’s in a song” – it was a neat line then, these days its not quite true. But good grief, they know how to write a hook that builds. With the caveat that when I mention Bon Jovi on the site it’s done in a positive way, the way they do this is kind of “Slippery When Wet” levels of huge, but it’s modern.

They’ve spoken in interviews about a desire to make the album they wanted to, and have it not “fit in”. This is that record. They’ve worked with The Graves Brothers for this (Asking Alexandria, Funeral For A Friend etc) and that modern touch is all over it, right from “Blind”. And yet, when Marcus Thurston (one of three guitarists they have) plays the solo, it screeches like a preening, proud hard rocker.

“(I Don’t Need) Perfection” does the same thing, basically, and those who know hard rock in 2020, will know exactly what I mean when I say that you can tell it came out on the Frontiers label. Modern rock should sound exactly like it does here.

“Man On A Mission” is a case in point, you almost expect it to break out in “Personal Jesus” by Depeche Mode at one point, but when it gets going, this slams like the sleaziest blues.

“Don’t Fool Yourself” you can imagine in the live set, you can imagine a sea of arms going up in the air as it kicks in, and actually, this is heavy enough, generally as a collection to have a crossover potential.

Nearly all the songs are around four minutes long, but some of them do the thing of sounding epic. The keyboards of “The Consequence Of Having A Heart” swagger a little more, and the melody – honestly – recalled New Order a little to me.

“This One’s For You” apparently nearly started the album, so it’s good that in old money, if you will, it starts side two. It soars, I’d have bought this in 1989, 1999, whenever. It’s timeless, it would have fitted in throughout.

I haven’t really focussed on the lyrics much, and that is remiss of me. Because they’ve upped their game everywhere, not just musically. The mid-paced “Battles Ain’t A War” is a good signpost to that, and if “Save Me From Myself” is more like “old” Vega if you like, then it’s a decent reminder that they’ve always been pretty good. “How We Live” is confident and classy, and could have been on the recent FM record without being out of place, yet, with no disrespect meant to it, or the band, it feels “Done With Me” might represent them more these days. Harder, wiser and a little bit more aggressive, it is the shortest thing here, but it contains this line in the pre-chorus: “I’m a deviant, well how convenient, maybe we were meant to be….” And in that moment, maybe the change is fully complete.

Maybe, maybe not, but “Grit Your Teeth” is the heavy, muscular, yet crunchy collection they’ve always hinted.  The record that is going to put them amongst the big guns in British rock – at long last.