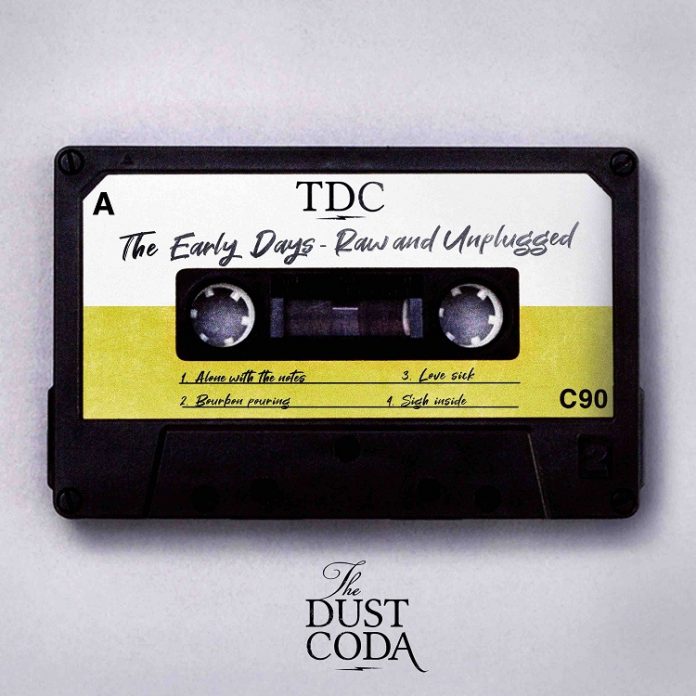 I suspect that there aren’t many music fans that haven’t watched an online concert in this lockdown period. I haven’t. I have no plans to, either. I am not on board with watching staged events on my computer. It seems soulless, and frankly a little forced.

For the exact opposite reason to that, though, I have been enjoying the new ways to be creative that artists have found. Whether its Beans On Toast, who has been sticking out topical songs that he’s made that morning, or Birdmens, the blues collective who stuck out an album last week that they recorded and wrote while in isolation, that is exactly what music – and musicians – should be about.

As the name of the EP (not to mention the cover art) of this indicates, This is The Dust Coda doing something similar. The four songs here were – in their words –  “made one very early morning during the writing sessions for our debut album. We had written the songs and started demoing them in between drinking sessions and strangely kind of forgot about them.”

A totally different vibe to the album too, given the acoustic nature. And it is merely proof of two things. First they are a wonderful band, but second that singer John Drake has one of the great voices.

Fragile, weather-worn but resolutely stoic “Alone With The Notes” sounds downbeat “I am moving too fast for living” he offers here, and honestly, the name Jeff Buckley keeps resonating with me here.

“Bourbon Pouring”, which is probably a product of those “drinking sessions” that they talked about, sounds as reflective and as hungover as you like, but the guitar here from Adam Mackie and Drake is perfect. Americana bands the world over would be proud of this one.

“Love Sick” with its percussion from Scott Miller, doesn’t sound too dissimilar from a Ryan Adams track from the “Gold” era (I am aware I am on shaky ground to mention him, but it was a marvellous record) but Drake’s unmistakable Robert Plant-ish roar is in place here to take this somewhere else.

The last of the four – you can hear them talking in the intro – shows the scope and the talent on show. “The Sigh Inside” sounds huge somehow, which is quite a feat for something so gentle.

Although it makes you long for the new album they’ve been teasing for ages, it would be a shame, actually, if “The Early Days – Raw And Unplugged” was only seen a stopgap, or a “lockdown” product for The Dust Coda, because it is better than that. It opens up a different side to what was already a fabulous band. Turn Facebook off and listen to something real instead.