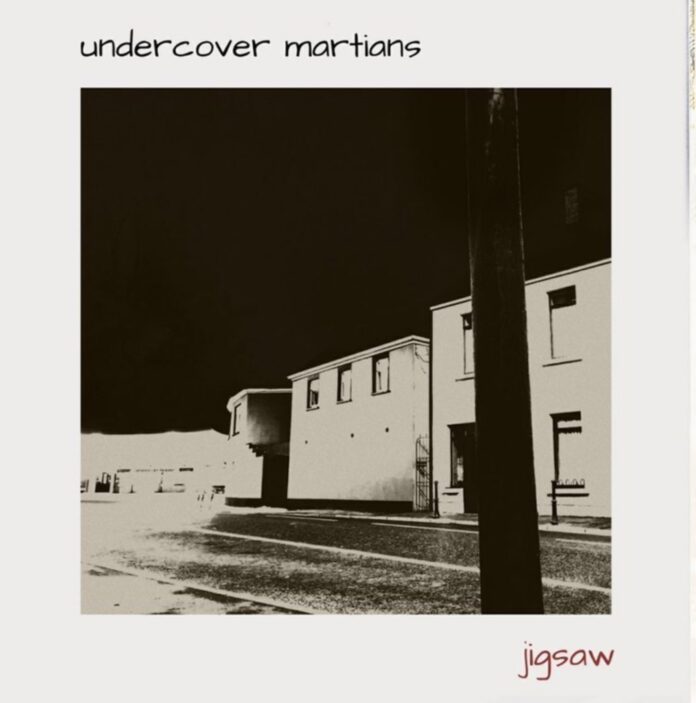 `Jigsaw` is the debut EP from Undercover Martians and is comprised of songs written between 2018 and 2021 and deals with the theme of growing up and the different emotions that you experience during your late teens and early twenties.

Hailing from both sides of the Donegal-Leitrim border in the North West of Ireland, members are Killian Fox, Michael McGloin, Dáithí McGloin and Rory Sweeney.

This extended play opens with `All My Friends` with jangly guitar chords, a continual drumbeat and underpinning bassline allowing a platform for the vocals to drift in and out as the number progresses. I read that the song is an ode to feeling like you’re going insane. The track had a quite mesmerising almost dreamlike quality about it.

A wah wah guitar riff leads us into and through `Sarcasm Is Sexy` and has some fairly languid vocals that soar over this fairly funky pop offering. The song deals with the initial stages of a relationship – all of the nerves and excitement that comes with meeting someone and falling in love for the first time. It simultaneously describes the anxieties and uncertainties of early relationships, as well as all of the exhilaration that comes with them as well.

Title track `Jigsaw` has a fairly long intro before the vocals join and the number becomes quite enthralling as I found myself drifting off with my own inner thoughts and day to day musings.  A track that seems to seep into your subconscious. We have a fairly fast paced no nonsense work out with `Rock And Roll` that had just the right amount of swagger and attitude. There were some blistering guitar riffs shared throughout this driving vibrant energetic composition.

`Only Me And You` closes out this five track EP and it`s a fairly introspective and thought provoking piece with vocals that expressed the anxiety and pain shared within the lyrical content. The musical accompaniment began fairly stripped back but grew in volume and depth as the number progressed.

There was plenty to enjoy on the `Jigsaw` EP and I have to say that Undercover Martians deliver some captivating tunes that have a maturity well beyond their years.

This is a band that I’ll certainly be tracking their future progress and would suggest you should to.